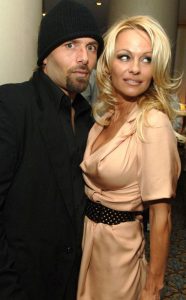 Pam Anderson and Rick Salomon, who are in the midst of a second acrimonious breakup in under a decade . (Image: Denise Truscello/WireImage)

The revelation came as the former Baywatch star remains locked in messy divorce proceedings with Salomon, who, she claims, is attempting to hide the winnings from the taxman.

Just to be clear, this is the second break up for the couple, whose previous marriage was annulled by the blonde star in 2008, after claiming fraud as the union’s underpinnings.

According to celebrity site TMZ, Anderson says that Salomon is lying in his annulment papers by saying he lives in Nevada, where there is no state income tax for residents. She says they both lived in Malibu, California, where state income tax is 13 percent, but that Salomon recently bought a $4 million house in in the Silver State to make it appear that he is living there.

He Says, She Says

Meanwhile, Salomon has filed for an annulment in Nevada, while Anderson wants a divorce in California, because she says it would entitle her to half his money. 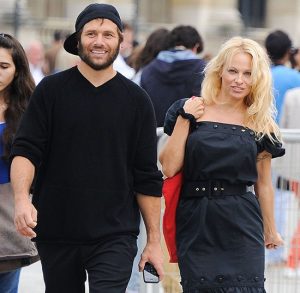 An earlier union ended in anullment; if Saloman has his way, the second time around will as well. (Image: indiatoday.intoday.in)

Actually, Pam would also be entitled to 1/2 Salomon’s money in Nevada with a divorce, as it’s also a community property state, but maybe her attorneys forgot to tell her that.

The actress was granted a restraining order against her husband last week, whom she alleges in court documents tried to strangle her during sex.

She also alleges he would insult her after losing at poker, calling her a “slut” and a “crack whore.”

Salomon, who cashed fourth in the Big One for One Drop in 2004 earning $2.8 million, and once owned an online gambling website, is better known for romping with Paris Hilton in their now-infamous sex tape (no, we’re not linking to it, do your own work) than he is for poker.

However, he was a mainstay at Molly Bloom’s Hollywood high-stakes home games and was once named in a lawsuit with Tobey Maguire, Nick Cassavetes, Dan Bilzerian and Gabe Kaplan, among others.

The suit was filed by a group of investors who had been defrauded by bogus hedge fund manager Brad Ruderman. Ruderman had been a regular in the game, where he had reportedly lost hundreds of thousands of dollars, and the filing attempted to retrieve the missing money from the group of players. Maguire eventually settled out of court. 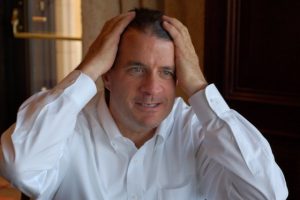 Prior to that, the Texas banker had last been seen in 2006, scuttling from the Wynn and vowing that he was “done” with poker, after a $16.6 million bruising at the hands of Phil Ivey. Beal’s various matches against a loose consortium of pros known as “The Corporation” have become the stuff of legend and were immortalized in Michael Craig’s book, The Professor, The Banker and The Suicide King.

Beal’s return to Vegas to face Brunson after an eight-year hiatus was witnessed by poker player Kyle Loman, who tweeted the proceedings live.

According to Loman, it took around eight hours for Brunson to beat Beal for $5 million, after which they “fist-bumped and left the room.”

i dont really think that Andy Beal would invest that much. So far he maximally lost 16M, but 40…