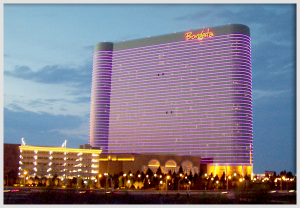 Pala Interactive and GAN could supply the Borgata’s iGaming services in 2016 if rumors of a split with bwin.party are true. (Image: cffc.tv)

Earlier this week eGaming Review published a report which suggested that since GVC Holdings took control of bwin.party it’s been having issues with its iGaming license in New Jersey.

Despite being granted a temporary license to continue providing iGaming services in the state (its software powers the Borgata’s casino and poker platforms), the relationship between the two parties looks to be on shaky ground.

The report by eGaming Review suggests that the Borgata may be looking for a way to move away from bwin.party and establish a working relationship with the Game Account Network (GAN).

In a press release sent out by GAN, it announced that it had extended its play money deal with the Borgata and will now provide real money services for the company.

Alongside this move away from bwin.party’s platform and towards GAN, it’s also been reported that the Borgata will be shifting its poker product to Pala Interactive.

Pala Interactive and the Borgata first joined forced in November 2014 when the former was granted a Transactional Waiver by the New Jersey Division of Gaming Enforcement.

The tribal operator has worked under the Borgata banner as an online casino site ever since, but until now it hasn’t launched a poker platform.

Despite plans to go live in 2015, the move was put on ice because of PokerStars’ potential move into the market.

Moreover, the operator’s CEO Jim Ryan (the former CEO of bwin.party) has never considered poker to be a major part of Pala Interactive’s business plan given the relative lack of liquidity in the state at present.

However, with a possible break up between the Borgata and bwin.party on the horizon, it could be the chance Pala Interactive needed to launch a poker platform.

Although Pala Interactive has declined to comment on the matter, the uncertainty surrounding GVC’s licensing status in New Jersey has certainly made the possibility of change extremely likely.

Of course, even if Pala Interactive does launch a poker product in unison with the Borgata, it could still have its chances of success thwarted by PokerStars.

Earlier this week the operator announced that, pending the result of a testing period at the start of March, it would finally launch PokerStars NJ on March 21.