Paddy Power Betfair may soon be an unstoppable force in the online gambling universe after a merger joining the two megapowers is finalized. 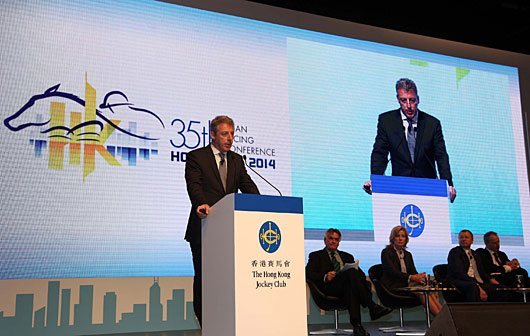 Seasoned gaming executive Breon Corcoran has sat at the helm of both companies coming together in the Paddy Power Betfair alliance. (Image: Hong Kong Jockey Club)

Betfair and Paddy Power are already two of the better-known names in the world of gambling, especially in the United Kingdom. Now, the firms are set to join together to become one of the largest bookmaking businesses in the world.

According to the two companies, Betfair and Paddy Power are set to be part of a £5 billion ($7.74 billion) merger, one that would create a brand that would be a leader in the UK, Australia, and many European markets.

The deal would see Paddy Power shareholders take control of 52 percent of the merged company, while Betfair shareholders would control the remaining 48 percent.

While such a merger would be enormous in terms of size and scope, it would be just the largest example of consolidation in the international gambling industry. This has been particularly true in the UK, where new taxes and regulations on gambling have caused companies to look for ways to cut costs and streamline operations.

In just the past month, two other major mergers have been announced in the gaming sector. In July, Ladbrokes reached a deal with Gala Coral to create a combined company worth about £2.3 billion ($3.6 billion).

More dramatic was the battle over online gambling giant bwin.party. Both 888 Holdings and GVC Holdings have been submitting bids in an effort to take over bwin.party; currently, bwin.party is sticking to the 888 offer, but GVC has been working to convince the company that it has even more to offer in a takeover bid.

This latest merger would be even larger than either of these deals, however. Paddy Power, based in Ireland, is one of the largest bookmakers not only at home but also in the UK and Australia.

Meanwhile, Betfair has become the largest online betting exchange in the world, allowing gamblers to place bets against others who are willing to take the other side at agreed odds, with Betfair taking commissions on those wagers. In recent years, Betfair has also offered more conventional sports book wagering to customers.

Combined, the two companies have about £1.1 billion ($1.7 billion) in annual revenues.

Merger Would Increase Scale of Business

Details of the proposed merger have yet to be finalized, but both companies agree that the move would be an attractive option that would allow the combined outfit to compete on a much larger scale than either business can do on their own.

“These are two very strong businesses with complementary offerings that have a lot in common,” said Cormac McCarthy, finance director of Paddy Power. “We have seen increased regulation and taxes across the piece and scale has value.”

Outside analysts appear to agree with this assessment.

“The two best-quality companies in the European online gaming sector are on the verge of merging,” said analysts from Davy, an Irish stockbroker. “The combined entity is likely to be greater than the sum of its parts. Overall, we see substantial value-creation potential from the proposed merger.”

Betfair CEO Breon Corcoran is expected to be the head of the new company if the merger goes forward. Corcoran is in a uniquely qualified position to head up the merged group: he was previously the chief operating officer at Paddy Power as well.

don’t expect rake rates to drop if/when the merger is completed . I am of the opinion that competition is good for the consumer .