Overcoming a Rough Start at the WSOP
October 25, 2021 Poker Strategy

Overcoming a Rough Start at the WSOP

Well folks, it’s been a rough ride so far. I’m down almost $40,000 for the WSOP at this point, but I’m not down about it. When I put the $25K HORSE and the $10K HORSE on my schedule, I was keenly aware that if I failed to cash in one of those two events early in the series, I would be starting the summer in a big hole. 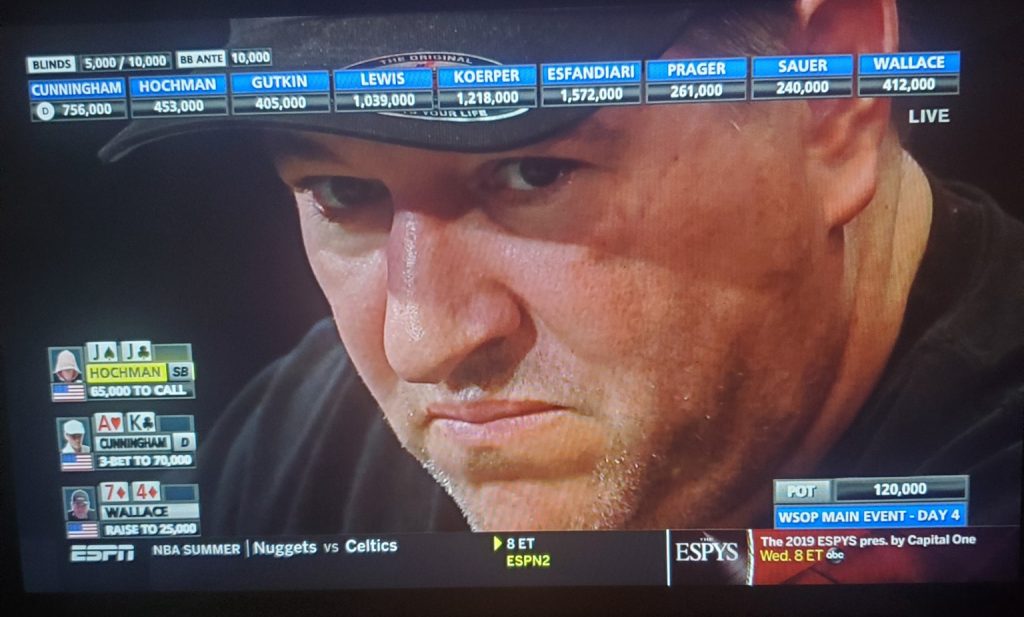 Despite my sour look, this table went fairly well for me because I stayed focused even though things were looking rough. (Image: ESPN)

While I’m not happy about my results so far, I’m very careful with my bankroll and never put myself in a position where having a rough series will leave me in a tough position financially. Poker isn’t allowed to ruin my week or month because of short-term variance. And I can’t let it bother me or a short, bad run can turn into a long-term tilt problem and ruin my series.

Every tournament is a potential summer saver and one good run can change everything. I won’t let myself miss that opportunity because I’m tilted and playing badly.

If you let those first four bust-outs bother you, the two tournaments that are left — the ones where you’ve run good enough to go a little deeper and, potentially, have real money on the line — are the ones that will be affected by your tilt, your anger, your disappointment, or whatever else you let creep in after those initial bad results.

So now you’ve let a bad run that’s already passed — events that you can’t play anymore and that have no further effect on your bottom line — mess up the only events that actually matter; the deep runs that you’re still playing.

Playing a big Sunday schedule online will either cure your tilt problem from busting tournaments or teach you the hard way by decimating your bankroll. After dealing with that, being down at the start of the WSOP is never a big deal for me.

I’ve also seen my friends have rough summers only to pull out a nice score at the end to save their series and end up with a pile of cash and, maybe, some new jewelry. I’ve even done it myself.

In 2017 I went into the Main Event down almost $50,000 for the series. I’d played hardly any cash or single-table events, focusing on bracelet events instead, and it hadn’t gone my way. The Main Event was my last tournament of the year, my final shot at saving the summer.

I also sold action in 2017, and my buyers were ecstatic to have more than tripled their investment. I was the only person who wasn’t happy. When you’re in a tournament for six days and have reached the final 50 players in such a big field, you start to have some very unrealistic expectations about how the tournament is going to play out. But within a few days, I was really happy with the fact that I’d saved my summer, played well even after a huge downswing, and made money for the people who invested in me.

The ups and downs of tournament poker are huge. The downswings are so long that it can be hard to wrap your brain around what’s happening to you. A great player can go 50 tournaments without a top-three finish if they’re playing in big fields where those top spots are tough to reach consistently.

And the WSOP is the highest variance form of tournament poker in terms of the length of time that you can run bad. At least when I was playing online, a bad run of a few hundred tournaments that were below expectation would be over within a few weeks. An online player who plays hundreds of tournaments a month will get through a downswing in a much shorter amount of time, though it can still feel like you’re in an endless freefall for weeks at a time.

Handling big swings at the WSOP

The big fields at the WSOP, combined with the fact that you play a smaller number of tournaments in total, means incredibly high variance. And that can drive you nuts. It WILL drive you nuts. And if you aren’t mentally tough enough to keep playing your best game, you’ll turn those first few bust-outs into a tilted Sunday evening.

Except that in this case, it’s not a thousand or two that you lose from dusting off a few extra buy-ins in a $100 rebuy on PokerStars, it’s 10s of thousands of dollars. And, if you’re tilting, you’re drastically reducing the chances that you’ll win 10s of thousands of dollars and increasing your chances of having a disappointing summer that will leave a bad taste in your mouth until your next big score.

So, if you’re having a bad week or a tough month like I am, take a day off, relax, and get your head clear. It wouldn’t hurt to grab a book or listen to a podcast on sports psychology while you’re at it. Experts on the subject have spent a ton of time and money to help the best competitors in the world play their best games all the time, and their knowledge is invaluable when it comes to poker.

Here is a list of solid podcasts on sports psychology. You can absorb these while you’re at the tables or on your way to the cardroom without taking any serious time out to actually study the subject.

If you want to get serious about developing a winning mindset, books like The Way Of The Seal and The Comeback Quotient are great study material.

Whatever you do, don’t let a bad start to the WSOP or any other series ruin your chances of a big score. Good luck, and I’ll see you at the final table. Now I’m headed for the hot tub with a beer in my hand to get my mind off everything and get my own head on straight. There’s still a lot of poker left to play.