Nazis do still exist in 2020, as poker players in Oregon recently learned. A pair of incidents at two card rooms in the state subjected players to racial slurs, sexist insults, and violent threats, much of it captured on video. 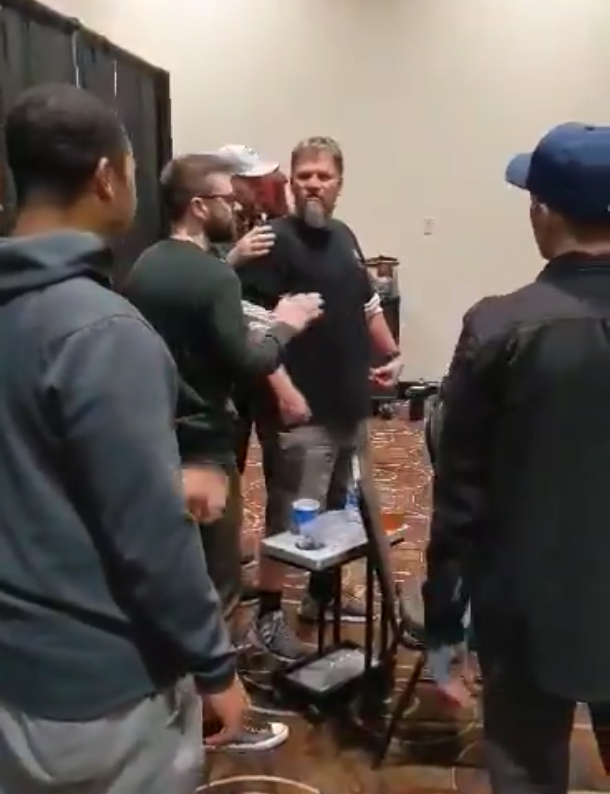 An unnamed poker player in Oregon apparently believes screaming racial slurs in a public space is the best way to convince people around you that you have been wronged and don’t deserve to be ejected from a game. (Image: Facebook/Twitter)

A 2:20 clip taken at Chinook Winds Casino in Lincoln City appeared on Facebook after Will Butler, a poker player in attendance, shared it. The video captures the apparent aftermath of a dispute between two players that went far beyond anything that could be resolved by calling the floor.

After watching the video, you may wonder if you traveled back to the 1960s. We can assure you that you didn’t and that there are still some disturbed people out there, some of whom happen to play poker. You’ve been warned: this video includes most of George Carlin’s seven words peppered with racist expletives. NSFW if your audio is up.

This weekend I was put in a situation that I didn’t deserve. This video only shows part of the story @ChinookWinds please know I will never ate foot in your establishment again. Your security and management are a joke. pic.twitter.com/gJIpuRSrpo

The argument was between a white man (standing) and a person of color (seated at the table, off-camera). Another player at the Chinook Winds Casino captured the action.

The video begins with an unidentified villain with short blonde hair and gray goatee refusing to calm down before screaming “F*** you, n*****!” and launching into a tirade of expletives and racial slurs. He then challenged his opponent to “go outside” to fight, because we all know that adults of legal gambling age settle bad-beat disputes with their fists.

Before a relatively diminutive casino security force eventually removed him, the angry player repeated the n-word another 10 times over the course of two minutes, along with calling at least one other table-mate a “fat f***” multiple times.

CardsChat contacted people in attendance for details and learned the casino has banned the player from its property. We are withholding his name until we can verify his identity.

Related: What Led to Racist Outburst in Oregon Poker Room? And Did the Chinook Winds Casino Make it Worse?

The racist outburst took place Saturday, months after a similarly disturbing incident occurred at another Oregon poker room. It appears both episodes involved either the same angry individual or, perhaps, a close relative.

In the comments on Butler’s original Facebook post, somebody posted their own video of a separate incident that reportedly took place at the Final Table Poker Club in Portland.

We’re still confirming details, but in this instance, the angry man, referred to as Rick, verbally attacks a female opponent, calling her a “c***,” “w****,” and other sexist vulgarities before twice informing others barking back at him that they didn’t know who they were messing with because he is a “f*****g Nazi.”

This story is developing … if the video reappears, or we get more information about the self-proclaimed Nazi, we’ll let you know.

UPDATE: Here is the video of the sexist outburst at the Final Table Poker Club in Portland, in which the aggrieved player, since identified as Ricky Forbito, claimed to be a Nazi. This incident reportedly led to his being banned from this poker room, too.

Chinook Winds is over two hours from Portland.

Yes, and your point? Many Portland players go to Chinook Winds for their series events.

You said that you would publish the name of this ranting bozo once you’d verified his identity. It’s been 24 hours. Are you still going to do this?