What started out as a friendly poker game among high school buds grew into a major black market marijuana distribution ring that resulted in the largest pot bust in Colorado since the state legalized weed in 2012. 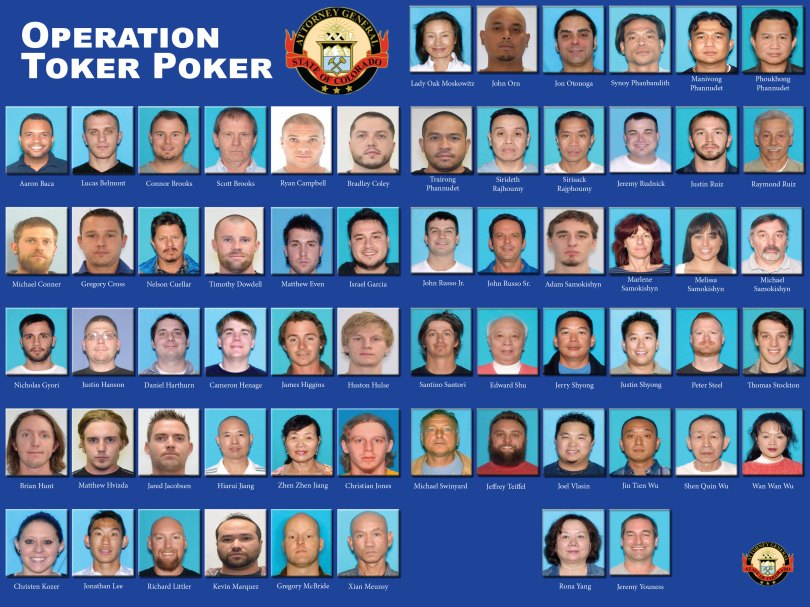 Sixty-four people who met occasionally to play poker were involved in a major operation growing weed in Colorado and selling it in other states. (Image: Denver Police Department)

Operation Toker Poker, as police called it, was a multi-year investigation that led to 74 indictments and more than 150 raids of Denver-area homes and warehouses, where authorities confiscated 2,600 illegal pot plants and more than 4,000 pounds of weed destined for states where cannabis is not legal.

According to multiple news reports out of Colorado, the group has been illegally growing and selling pot for four years. The network distributed its marijuana in Texas, Kansas, Nebraska, Ohio, and Oklahoma, according to the indictment, and was netting about $200,000 a month.

In addition to drug trafficking crimes, the group has been charged with 31 felony counts of money laundering, tax evasion, and defrauding investors.

As part of the scheme, the Toker Poker group convinced investors they were a licensed marijuana operation taking part in Colorado’s booming marijuana industry. Two former Denver Bronco players, Joel Dreesson and Erik Pears, were among the duped investors.

“This case is a prime example of how the black market for marijuana has not gone away with the legalization of both medical and recreational marijuana in Colorado,” Coffman said.

According to the 51-page indictment, 62 people and 12 businesses were named for their criminal involvement. Forty-three suspects are in custody, and the others are considered on the lam and being pursued.

What’s in a Name?

This connection between pot and poker may have provided a natural name for the investigation, but it’s also created somewhat of a headache for creators of the “Toker Poker,” a popular pot smoker’s tool.

When the grand jury in Denver issued the indictments on June 28, Matt and Leslie Bodenchuk say they were inundated with calls from friends and family concerning their successful product. The couple told The Cannabist that the operation’s name made some people assume they were involved, and it could be having a negative impact on their legal business.

“If you ever looked for Toker Poker online, we were all over the first page of Google,” Matt Bodenchuk said. “[Now] we’re down at the bottom of the Google search. I’m not sure how that’s going to affect our sales, but I know it’s going to.”

Great Give poker another bad rap for no reason ……..