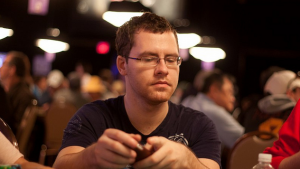 It was a rough month in online poker for Daniel “Jungleman” Cates. (Image: Pokergurublog.com)

High stakes online poker has high variance. One month you’re on top of the world, scoring a six-figure profit. The next month you’re asking your friends for beer money. Such is life for players such as Phil Ivey, Dan Cates, and Viktor Blom.

The month of April was no different for some of those players, and others. But the most positive results were that of Ben “Sauce123” Sulsky. His PokerStars account won more than anyone else online last month with a $164.642 profit.

It wasn’t the first time Sauce has won big. In fact, his $164,642 profit in April was only a small percentage of his lifetime online earnings. Currently, he was won more than $4.5 million lifetime on PokerStars in 605,000 hands.

He earns more than $7.50, on average, every hand he plays. That’s quite an impressive accomplishment even for a high stakes player. His main game is pot-limit Omaha.

Other notable names on the April top list include philivey2694, otherwise known as Isaac Haxton (no, not the real Phil Ivey), and Brian “aba20” Townsend.

If your name is Viktor Blom or Daniel Cates, you had a rough month. Cates, more commonly referred to as “Jungleman”, plays under the screen name of w00ki3z on PokerStars. He dropped $106,124 last month.

Cates wasn’t the biggest loser, however. That dubious distinction goes to flong78. His, or her, birth name is unknown but this PokerStars account, which has been active since 2013, lost $279,134 in April. Ouch.

Jungleman’s mediocre month isn’t a pattern. He’s been one of the top heads-up players for a few years now. But for Victor “Isildur1” Blom, losing $144,722 in a month isn’t a surprise.

Although Isildur is a lifetime big winner, his crazy style of play has led to some major swings throughout the years. He plays on both Full Tilt and PokerStars.

Ben Sulsky has been consistent through the first four months of the year. He’s second on the list of biggest winners in 2016 with a $538,160 profit. Isaac Haxton is in second place with $205,262 in earnings.

They’re both currently chasing Educa-pOker’s $629,611 profit. These figures will change many times throughout the remainder of the year. Such is the nature of high stakes gambling.

Alexander “Kanu7” Millar probably isn’t satisfied with his results thus far in 2016. His $616,425 in losses is more than anyone else.

How come flong78 name or birth name is unknown?

In order to have a PokerStars account don’t you need to veify your name or who you are , to have a account?

What if its a underage player, playing illegally?

Think it just means he is an unknown to the poker community.

Obviously Pokerstars will have his details but they can’t jut release his details just because he’s a big winner or loser.