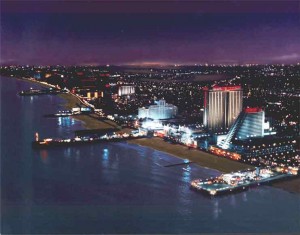 The latest report from the New Jersey Division of Gaming Enforcement was released this week, revealing that online poker revenues have remained relatively stagnant month-over-month. Online poker turned over $3.2 million in March versus $3.1 million in February; this is in contrast to online casino revenues which showed continued growth, with overall revenue of $11.8 million, up $1.5 million on the previous month.

While the figures for online poker are disappointing, they’re not utterly alarming – yet. The growing gap between these two sectors in the virgin US market does mirror the current trend in online gaming around the world, where casinos are outstripping poker, the latter having largely plateaued. However, the reality is that revenues are falling far short of initial projections in New Jersey, which ranged between $250 million to $1.2 billion annually.

At the recent iGaming North America Summit in Las Vegas, Ultimate Poker execs Tom Breitling and Tobin Prior admitted as much, but remained upbeat about the future of online poker in the state. People have been slow to adopt to the new regulated market, they said, for several reasons, and some of those reasons relate to regulation itself. With regulation, come constraints, such as a strict age verification process, which requires customers to negotiate a far more difficult sign-up process that they would have been used to when playing on unregulated sites. The software can be tweaked and improved in this field, they admitted.

“We had incorporated way too many clicks in this process, and so people who had played online poker in the past never had to go through this detailed process filled with all these extra clicks,” Breitling said. “Some people are taking a wait-and-see attitude about playing online games.”

There are also payment processing issues which need to be developed too. For example, Visa still refuses to process online gaming transactions for New Jersey residents, even though they are legal. The reintroduction of e-Wallet Neteller into New Jersey will help matters. Neteller was once the poker player’s online payment method of choice in the US, but it beat a hasty retreat in the wake of UIGEA, the bill that banned all Internet gambling transactions in America. Neteller has recently announced its return to the US market, and should become the stepping stone between Visa customers and New Jersey’s online poker sites.

Breitling also cited geo-location issues in New Jersey as one of the challenges ahead. Nevada has been easier to control in this sense, because the majority of the population lives primarily in concentrated metropolitan areas of the state, whereas in New Jersey more people live around the state line. These are technology issues that will improve, incrementally.

But still, while revenues have been flat, liquidity levels have actually dropped slightly over the last two months, and that suggests New Jersey will have to look towards sharing its player pools with other states sooner rather than later. While Nevada and Delaware have declared their openness to the sharing of liquidity and already established the first-ever such compact, New Jersey has been strangely reticent on the subject. It’s estimated that sharing with those states would boost liquidity by 30 percent. New Jersey simply must accept that having enough games to retain customers and attract new ones is the blueprint for success in the online poker industry.

We must remember that it’s still very early days for legal and regulated Internet poker in New Jersey, and month-on-month stats are fairly irrelevant in the long-term scheme of things. The nosebleed figures initially predicted may indeed be attainable, but it will be a gradual process. We’re keeping our fingers crossed.