An unidentified player posting on the Two Plus Two poker forums under the screen name “godmode49” posted a video to YouTube that allegedly shows how rings of cheaters are using dual computer setups to avoid detection on online poker sites. 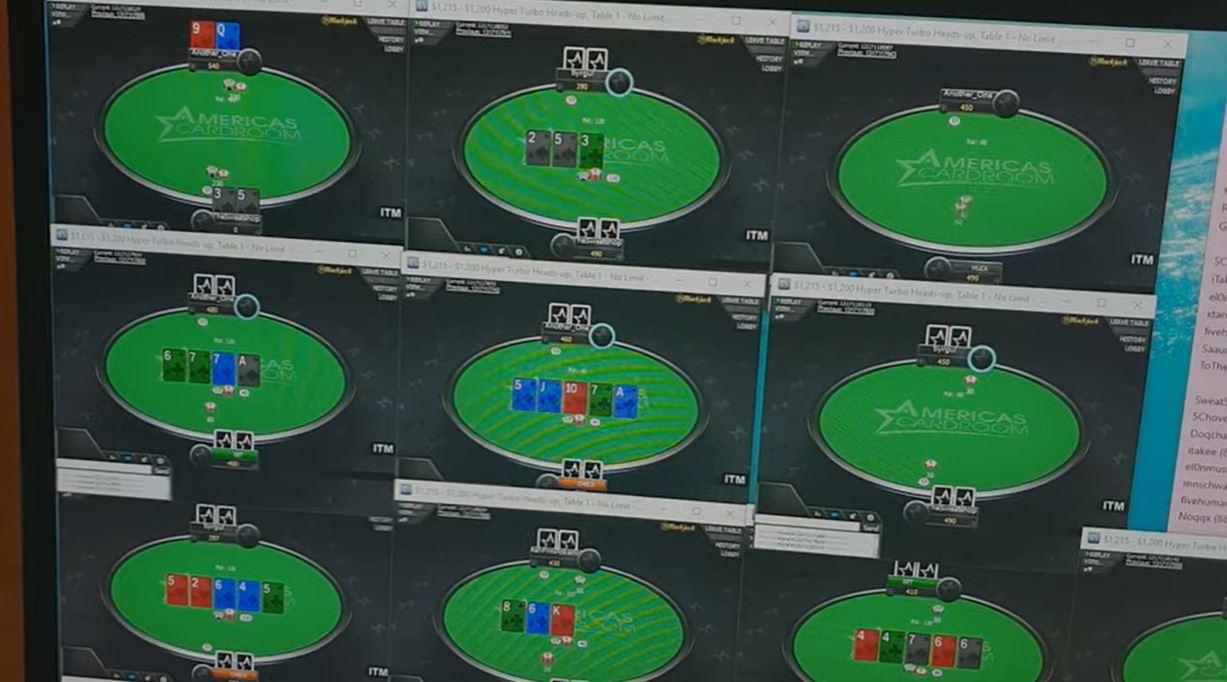 The video refers to cheating in heads-up sit and go tournaments (HUSNG) and, in particular, the short-stacked turbo versions that many players believe are essentially solved due to the relatively limited number of strategic options when compared to other poker formats.

In the video, the poster shows how a primary computer is used to actually connect and play on the poker sites, along with software designed to ensure clean, predictable multi-tabling layouts. That computer then streams video of its screen to a second computer, where several other programs are running.

The key features on the second computer include optical character recognition software that can read the poker action that is being streamed from the first machine. Once the recognition software does its job, the information is then put into software that has already been programmed with calculated game theory optimal play for the given situation, allowing the user to play perfectly (or near-perfectly) in every possible spot.

The video shows the hardware used to avoid the detection of the second machine, as major poker sites do attempt to detect such setups. It also shows examples of the setup being used, with dozens of tables being played by a bot in real time.

While the creator of the video suggests that many people are using this setup, particularly a ring operating out of Bulgaria, but using VPNs to appear to originate from other European nations, his main target was “Xrab,” an individual he also referred to as Ivan.

“His team is composed of almost exclusively Bulgarians, yet they play from Germany and Malta on Partypoker,” the creator wrote in a text overlay for the video. “If the sites were to check though, all of their ID documentation would be Bulgarian.”

The individual behind the video also points out sites and networks such as WPN, Microgaming, and iPoker as being attacked by Xrab and other cheaters.

The video concludes with several minutes of screenshots of conversations between the poster and members of what they claim was their former cheating team, including a programmer going by the name Sergei Radulov, who was said to be the developer of the system. The conversations date back to 2017.

That last portion of the video was met with a mixed reaction from other posters in the Two Plus Two thread, some of whom questioned whether the person coming forward was simply a cheat looking for payback after having a falling out with his former team. However, almost everyone appreciated seeing how such cheating is allegedly happening, regardless of the motivation.

It doesn’t matter what his motives are,” poster TucoSalamanca wrote. “Catching these accounts will lead to catching more accounts, and to a better understanding [of] how these mafias operate.”

In 2019, it’s common knowledge that poker sites are in a constant state of war with bot operators, with major sites looking to detect and ban as many as possible to keep their legitimate player base from thinking their games are being overrun by cheaters. Some sites have even turned to publicly disclosing their efforts, such as Partypoker, which regularly reports monthly numbers of bot accounts that have been banned from its site.

My gosh wouldn’t it be easy for a number of cheaters to just use the telephone and tell each other what they have in their hand?