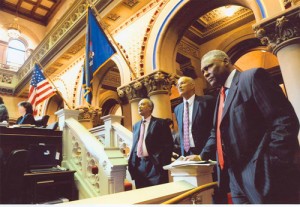 Despite the popularity of online gaming and poker across America, the number of states participating in the market is quite scant. Efforts from Nevada, New Jersey and Delaware have seen the states introduce online gambling with some success. But very few states appear to be jumping on the bandwagon. Now, based on a recent bill introduction, it looks as if some in New York are ready to dip their toes into the market.

New York Assemblymember and chairman for the Committee on Racing, Gaming and Wagering J. Gary Pretlow (D-Mt. Vernon) has introduced a bill that would allow for a system of licensed and regulated online poker in the state. The bill is partially a reaction to recent New York rulings that distinguish poker as a game of skill rather than a game of chance. The argument is a common one for many supporters of online gaming in the United States.

Bill A09509‘s purpose is meant to give the New York State Gaming Commission authorization to award poker licenses. Titled as “an act to amend the racing, parimutuel wagering and breeding law and the penal law, in relation to allowing certain interactive poker games,” the bill is nearly identical to Bill S6913 introduced in the New York Senate by Senator John J. Bonacic (R-Mt. Hope) earlier in March.

Pretlow’s bill is specific in defining Texas Hold’em and Omaha poker as the variations that would be legalized. However, room is left open for any other forms of poker seen as acceptable by a regulatory commission which would be formed under the bill’s terms.

According to the bill, ten licenses would be awarded by the state’s Gaming Commission within a period of 180 days after the bill’s approval. This waiting period is meant to ensure that a competitive market is created and early licensees don’t have an unfair advantage.

Licenses would last for ten years, with each licensee required to pay a one-time fee of $10 million. Gross gaming revenues would also be taxed at 15 percent. The bill also allows for the protection of players’ funds. Gambling funds would be held in a separate account to protect the player from financial risk, civil claims or corporate insolvency.

The bill also comes with a notable restriction as well. Operators who continued to offer online betting in the US after the passage of the Unlawful Internet Gambling Enforcement Act (UIGEA) are blocked from state licensing. Those who were out of the market after December 31, 2006 will be seen differently.

In reference to these “bad actor” operators the bill states as follows: “Granting those persons licensing privileges or allowing the use of the assets of such persons in connection with interactive gaming in this state, if those assets were used unlawfully, would reward unlawful gaming activity, would permit manifestly unsuitable persons to profit from their unlawful gaming activity and would create unfair competition with licensees that respected federal and state law.”

Though restrictive, the bill says any such operator can appeal said ban. A hearing would be given and the gaming commission may award a license. This bad actor clause is similar to an issue recently seen in regards to California tribes’ push for online gaming restrictions on certain operators.

Based on the bill, if New York were to enter the market, they would potentially be allowed to share player pools with other states. Nevada and Delaware have recently sought to take advantage of a shared market based on a 2011 reinterpretation of the Wire Act by the Department of Justice.

Wow. this is moving faster in New York than I thought it would. Let’s keep it moving and get online poker regulated in New York ASAP.