Online Poker In Australia Set For Crackdown After Government Review 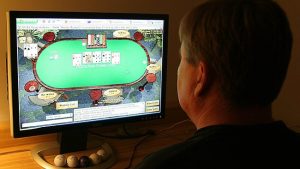 Online poker sites operating in Australia could be in for a tough time if the government pushes ahead with reforms of the Interactive Gambling Act. (Photo: AFP)

Online poker sites operating in Australia could be in for a tough time following a review of gaming law Down Under. The federal government has finally produced its latest report into online gambling in the country. And it looks like overseas sites providing real-money action to Aussies could be in for further prohibition.

A review into the outdated Interactive Gambling Act (2001) was ordered last year by outgoing Prime Minister, Tony Abbott. Of particular concern to the government was the way overseas sites, many from the UK, were able to offer services which played hard and fast with the current legislation.

In particular, so-called “in-running” sports bets (which had been made illegal online) were provided using a cunning piece of Internet software. Properly licensed Aussie sites cried foul, and the government stepped in.

Online Poker Could Be Blocked

However, the findings of the report go much deeper than a few sneaky tricks by offshore sports betting sites. The recommendations of the IGA review include protections for homegrown operators from “illegal” offshore poker and gambling sites.

In particular, the report is urging the country’s ACMA (Australian Communications and Media Authority) to push ISP (Internet Service Providers) to “block identified sites fostering illegal wagering activity within Australia.” This final move could see overseas poker rooms who may have perfectly legal licenses from jurisdictions like Malta or Alderney pack up and leave.

Since 2001, it has been illegal for poker sites to operate in Australia. That is to say, no poker sites can be based on Australian soil. The problem, of course, is that there’s not much the government can do about Aussies gambling on sites based overseas. Sportsbetting has its own licensing structure, and many major UK rooms like William Hill and bet365 have acquired Aussie licenses to offer services to Australians.

For a country that experiences one of the highest per-capita gambling rates in the world, it’s understandable that the Australian government is keen to deal with problem gambling. The IGA report makes several mentions of gambling addiction as a reason for cracking down on online gambling.

Singling out several European gambling jurisdictions like Malta, Gibraltar and the Isle of Man, all of whom have licensed online poker sites in the past, the report says:

“It should be noted that whilst these jurisdictions place great importance on having very high licensing and regulatory standards to ensure that gambling offers are fair and transparent, that controllers and beneficiaries are of good character, and that customer funds and rights are properly protected, 48 they also have a high prevalence of problem gambling.”

However, some areas of Australia have more slot machines (“pokies”) per capita than anywhere in the world outside Nevada. It’s unsurprising that critics of Australia’s anti-online laws, such as the major Internet gaming sites, have suggested that powerful land-based lobbies Down Under are looking to protect their lucrative pokie machine businesses.

Could PokerStars Be In Trouble Down Under?

The Australian government has agreed with 18 of the 19 proposals included in the IGA, many of which will look to prohibit Internet gaming Down Under. The report urges the government to:

With PokerStars currently moving back into the US market in New Jersey, it could be a tricky time. Amaya will not want to fall foul of yet more anti-poker regulation and could pull its services entirely from Australia. Aussie poker players might have to start checking flights to Mexico or the UK if their beloved games are taken away in the next few months.

Haha indeed, that’s so very nice of you 😉

As an Aussie, I find this very disheartening. I love poker and I’ll always play at my casino, but practicing online is what keeps me one step ahead of the live fish. Without online poker, I’ll be far less experienced and it will take me a lot longer to improve my game.