Swedish poker players recently recognized their own with the 8th Annual Swedish Poker Awards, just three weeks before the third annual American Poker Awards.  Since 2009, a nomination and voting process has been used to determine the country’s Player of the Year (POY), which in the past has included online legend Viktor “Isildur1” Blom and 2014 World Series of Poker Main Event champ Martin Jacobson. 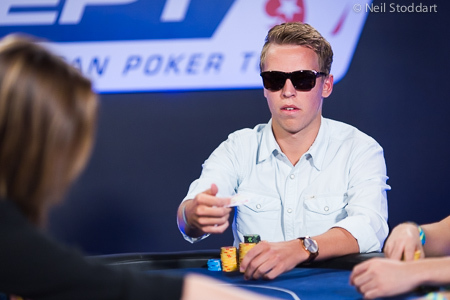 Simon “C Darwin2” Mattsson took home two Swedish Poker Awards, one for “Player of the Year” and the other for “Achievement of the Year,” at the 2017 event. (Image: Neil Stoddart/PokerStars)

For 2016, Simon “C Darwin2” Mattsson was not only deemed the Player of the Year, but also took the award for Achievement of the Year.

Like Blom, the only two-time Swedish Player of the Year winner (2009 and 2012), and last year’s winner, Christian “eisenhower1” Jeppsson, Mattsson was recognized for his accomplishments on the virtual felt.

The Swede kicked off the year by topping PocketFives Worldwide Online Poker Rankings for seven weeks. He lost the top spot in April, but took it over once again in May. At the end of the year, Mattsson spent more time atop the rankings than any other player, and became Sweden’s all-time number one player with 24 weeks atop the rankings.

His time ruling the rankings also earned Mattsson the award for Achievement of the Year, matching Jeppsson’s double win a year earlier. Additionally, Mattson captured his second SCOOP title when he topped a field of 1,310 entrants in 2016 SCOOP-01-H ($1,025 NL Hold’em).

“It is very rewarding to receive awards when so many others have also accomplished great achievements and results during the year,” said Mattsson. “The most important thing for me right now is to try to be humble and to realize that every year might not be like 2016. It is a matter of not becoming content, to keep my feet on the ground and to not think I am better than I really am.”

Mattsson, who has more than $3.5 million in online earnings, also won $102,237 playing live tournaments in 2016. His largest cash being $64,180 for finishing third in the EPT Barcelona €5K Hyperturbo event.

In addition to Mattsson, three other players took home recognitions.

For the second year in a row, Simon “Dybban” Lindell was named Ambassador of the Year. Lindell has been a familiar face in the Swedish poker community for over a decade.

Among Lindell’s contributions to the game are blogs, newspaper columns, and TV productions. In 2016, his media appearances included The Poker House, Boot Camp and Svenska Spel’s Twitch premiere from the Online Championships. He’s essentially the “Jason Somerville of Sweden.”

Meanwhile, anonymous online grinder “DeathByQuads” was given the award for Breakthrough of the Year, with 39 percent of the vote. That barely edged out Mats Karlsson and Robert Berglund, who received 33 percent and 27 percent respectively.

“DeathByQuads” worked his way up to eighth in the worldwide online rankings in 2016, while also capturing a Sunday Grand title.

Finally, Bo “Tommy” Alm, a supermarket owner from north Sweden, edged out Twitch star Robert “Lillrobban” Jonasson with 62 percent of the vote to win Regarding Player of the Year, which is akin to Amateur Player of the Year.

Alm, who had only played in home games with friends, checked “Playing the World Series of Poker Main Event” off his bucket list by traveling to the US last summer, and finished 148th out of 6,737 players to win $49,108.