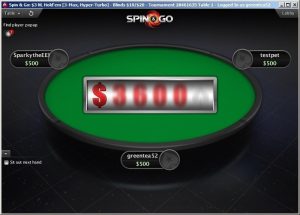 Nowhere is that more apparent than in the numbers being reported for cash games worldwide, which are often used as a bellwether for the overall online poker market.

These numbers have been falling for years, and the latest data shows that this trend probably won’t be changing anytime soon.

According to the latest data from PokerScout, online cash game traffic is down compared to in the past.

In fact, it barely matters where in the past you compare it to; whether you’re looking at weekly, monthly, quarterly or yearly numbers, there’s no escaping the fact that there are fewer real money cash games players at online poker tables now than there used to be.

In a seven-day average that ran through April 28, PokerScout reported a little over 41,000 players were playing online poker cash games worldwide. That’s about 12.6 percent less than a year ago, and down over 20 percent when compared to two or three years ago.

It’s even down over a shorter time span, though those comparisons are always tricky due to seasonal factors and other short-term changes: cash games appeared to be down about six percent from a month earlier, for instance, and was down 3.4 percent from just a week earlier.

So, what’s going on to cause these declines? There may be two major factors influencing these trends. First, there’s the fact that online poker and gambling regulation has stepped up in the last few years.

The loss of Americans at the biggest poker sites was a huge blow to traffic, of course, but even the segregated markets in many other large jurisdictions such as France, Italy and Spain have probably reduced traffic somewhat by limiting the player pools in those areas.

Regulation has hit in other ways as well. When the United Kingdom announced their new online gambling regulations, some major poker sites pulled out of many “grey market” nations in order to clean up their regulatory profiles.

For instance, both PokerStars and Full Tilt pulled out of many African, Middle Eastern and (to a lesser extent) Asian nations; while none of these nations were major contributors to their player bases, the combined effect likely had some impact. Meanwhile, some other sites pulled out of the UK instead, reducing their player bases in the process.

Lottery Tournaments May Be Largest Factor in Recent Declines

But perhaps an even bigger factor recently has been the introduction of “lottery” sit-and-go tournaments.

It has been clear that these have eaten into cash game and tournament traffic significantly, with games like “Spin and Go” tournaments on PokerStars proving extremely popular.

On the Winning Poker Network, for instance, their first day of “Jackpot Poker” tournaments, which came on April 15, saw the lottery-style games make up 86 percent of all sit-and-go games played on the site.

Despite these changes, however, the situation remains pretty static at the top of the online poker world. PokerStars is by far the largest online poker room in the world, with PokerScout saying the site has averaged 17,500 cash game players over the past seven days.

888poker has taken a firm hold on the number two spot, averaging about 2,200 players. Bodog remains the largest American-facing site (and the fourth largest overall), averaging 1,700 cash game players over the past week.

I think the down fall with cash money tables everyone fears there money getting took from the in house money backed payrolled house players with stacked cards.