One-Armed Poker Dealer Says Her Future’s in the Cards 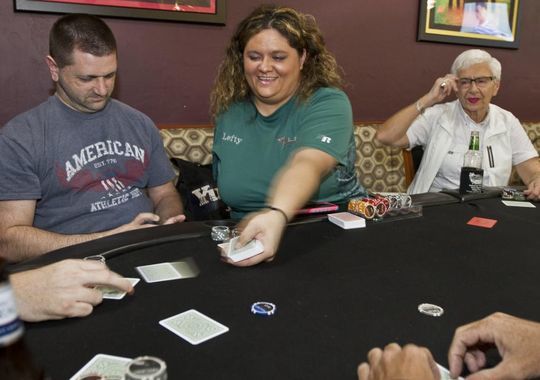 One-armed poker dealer Heather “Lefty” Schneck, who can deal a round of poker in around 22 seconds, lost her previously dominant arm in a car crash. (Image: Ricardo Rolon/news-press.com)

Sometimes in poker, all you need is one really good hand. At least that’s the philosophy of Heather Schneck, who is, as far we know, the world’s only, and therefore foremost, one-armed poker dealer.

Schneck, 38, lost her dominant right hand in a car accident in 2009, but that doesn’t stopped her dealing a round of poker in around 22 seconds (with the help of a shuffle machine) around the bars of her native Florida.

Schenck is a dealer for No Limit Entertainment, which runs the No Limit Pub Poker Tour, the biggest bar poker league in the US.

“We knew that because of her handicap we would have to be creative, but we wanted her to be a dealer,” No Limit Entertainment Director Jon “Gunny” Gracey told the Naples Herald.

“The first thing we looked at was that she won’t be able to shuffle, and we don’t want a player to shuffle for her because then it can be misconstrued as cheating or stacking the deck or whatever.

“We knew she would be able to pitch cards with one hand, so we got her a shuffler and we were going to buy her a wheeler dealer, a hand held machine with a deck and you just flick it with your thumb and spits card out to each player in direction. She accepted the shuffler, but she emphatically said ‘no, I don’t want the dealer.’ She wanted to be as much like us as she could.”

Schneck, who has been a post-accident poker dealer now for just two weeks, may deal a few seconds slower than her bimanual colleagues, but is nevertheless a hugely popular figure with the players, who know her affectionately as “Lefty.”

During the day she works as an IT support analyst and has taken on the extra work in the hope that she may one day be able to have a prosthetic arm fitted, which she claims will cost upwards of $250,000. (We checked online and found “upper extremity” devices typically range in price from $3,000 to $30,000, with a myoelectric arm, which allows the user’s own muscle contractions in the remaining area of the limb to control movements, going as high as $100,000).

“Money for a prosthesis is not within my grasp, but I believe with people’s help and charity that I might be able to get fitted for one someday and get my life back,” Schenck says. “I want to have a little bit of normalcy.”

Love of the Game

She also happens to love the game. A self-confessed “poker addict” and successful regular on the No Limit Pub Poker Tour, Schneck admits that, just 13 days after her accident, she had her sister wheel her to a poker tournament.

“She is resilient and doesn’t put up with anyone’s BS,” said Gracey. “And that’s truly what makes a good dealer. Players can come, sit down and know they’re gonna play poker and that the dealer can handle any and all issues that come up. The dealers that fully take control of a room are the ones that ultimately do the best.”

nice work if you can get it . ‘ lefty’ should be an inspiration for all of us !

Good for her! As long as you are doing something you love and smiling everything will be alright