The WPT Borgata Poker Open began Sunday in Atlantic City with 297 entries, including some major pros, including Olivier Busquet, Josh Arieh, Will Failla, Eli Elezra, Darren Elias, Joe McKeehen, and Brian Hastings. There will be 152 players from that flight moving on to Day Two on Tuesday. 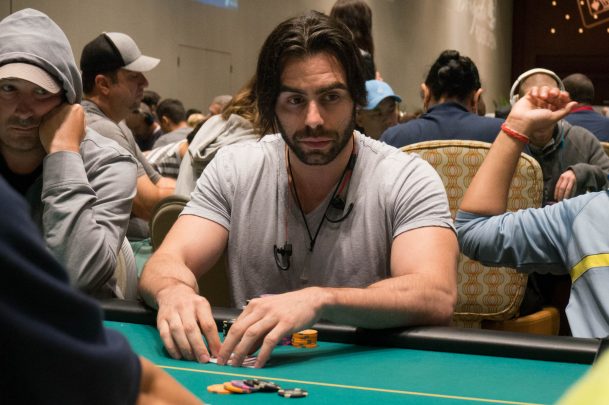 Olivier Busquet was among the big names who bagged big stacks on Day 1A of the 2016 WPT Borgata Poker Open.  (Image: azartnews.com)

Day 1B kicks off on Monday. Play will continue until we have a last man standing on Friday. The buy-in for this event is $3,500, and the tournament guarantees at least a $3 million prize pool. It’s a rebuy event, so those who busted on Sunday can get back into the action on Monday.

Farid Jattin ended the day with the largest stack (206,200). He’s going for his fifth career WPT cash and third final table. He would also like to join the WPT Champions Club for the first time.

Fox Sports will begin shooting the event at the six-player final table on Friday, to be aired at a later date. Mike Sexton and Vince Van Patten will be on hand to do their usual entertaining color calls.

Jattin has some poker superstars breathing down his neck. In second place, Josh Arieh has 187,000. Right behind him, Olivier Busquet will bring 177,700 chips to the table on Day Two.

There are three other Champions Club members with over 100,000 chips (Kevin Saul, Eli Elezra, and Will Failla). The reigning WPT Player of the Year, Mike Shariati, has 99,900.

Elezra, at 55 years old, is still having great success on the tournament trail. The Israeli is a couple of weeks removed from a 2nd place finish in a Las Vegas WSOP Circuit event (where he took $105,281) and a 6th place finish in a Venetian Deepstacks tournament ($46,000). This summer, he cashed at the World Series of Poker no fewer than 10 times.

Darren Elias, one of the top performers in WPT history, made it through Day One with 67,400, which is right around the average stack size. Elias is closing in on the $2 million lifetime mark on the World Poker Tour. That includes a pair of titles and six final table appearances.

William Vo, the 77-year old who became a crowd favorite when he finished 5th at the WPT Legends of Poker last month, will have 96,100 when Day Two begins. Vo is beloved for his positive attitude, win or lose.

Cliff “JohnnyBax” Josephy, the chip leader heading into the upcoming WSOP Main Event final table, isn’t holding that same spot here: not even close. But he did bag 39,000 chips and made it through Day One.