Ole Schemion won the EPT Grand Final High Roller Event in Monaco on Saturday night, taking down the tournament in a heads-up “clash of the titans” against fellow pro Mustapha Kanit. 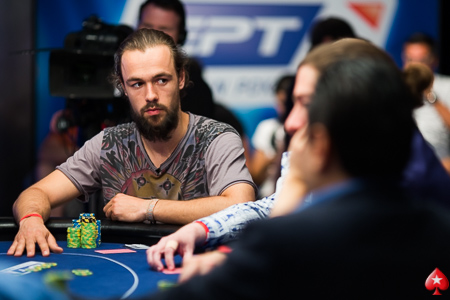 Ole Schemion beat opponent Mustapha Kanit heads up in the EPT Grand Final High Roller on Saturday. With over $10 million in earnings, it’s extraordinary to remember that the German poker pro is still only 23 years old. (Image: pokerstars.com)

Just as the Main Event drew to the end of its first day, these two heavyweights of the high roller circuit prepared to square off across the felt, having outlasted 44 of the world’s toughest players. That included the ubiquitous handful of wealthy businessmen prepared to risk €100,000 ($115,000) for a shot at the big prize.

The winner would take home a mouth-watering $1.8 million, which was enough to make even Dr. Evil point pinkie to lips with relish, and possibly just about enough to cover a night out in this notoriously exorbitant enclave of the super-rich.

Battle of the High Rollers

Schemion and Kanit had survived a final table of elite high roller specialists, including Igor Kurnakov, Stephen Chidwick, Sam Greenwood, and Ivan Luca, to set the scene for an irresistible finale.

Kanit is a young Italian pro whose rise as been unstoppable over the last few years, and whose recent playing form has been electrifying, both live and online.

His German wunderkind opponent, still only 23 years old, needs little introduction. Schemion is a prodigy who amassed $5 million in tournament earnings before he was old enough to play poker in Las Vegas, winning two EPT titles, while also sweeping a PCA title and a Partouche Poker Tour Main Event win onto his belt notches.

With his success on the high roller circuit over the last three years, Schemion has proved himself to be among the very best tournament players in the world.

Far be it for us mere mortals to analyze the stratospheric levels of meta-thinking that occurred between these two players on Saturday night. Suffice it to say that Schemion got the best of it this go-round, particularly when he gained momentum by picking off Kanit’s bluff with just ace-high for a big pot.

But for all the aforementioned elite strategizing, the final hand played itself. With a chip stack now under 20 big blinds, thanks to the aforementioned hero call by Schemion, Kanit made a standard shove with pocket sevens, only to run into the German’s queens. A snap call from Schemion sealed the Italian’s fate.

“It’s very sweet to win against Mustapha,” Schemion said afterward. “He’s a very good friend of mine,” he added.

Schemion recently took some time off from poker, and the rest has obviously done him good. The $1.8 million he won here represents the biggest score of his career, and takes him to second in the Germany all-time money list, with $10,103,891, just behind Tobias Reinkemeier.