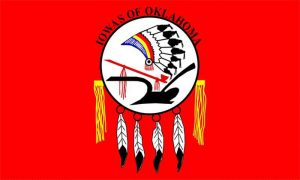 The Iowa Tribe of Oklahoma has received an arbiter’s approval to launch an online poker site, but will the federal government play ball? (Image: cms.lc-triballegacy.org)

The Iowa tribe of Oklahoma is seeking federal permission to launch a real-money online poker site that would cater to the regulated US and international markets.

The tribe says it is hoping to roll out its site, pokertribe.com, sometime this year, having received assurance from an arbiter in November that the operation would not be a violation of federal or state law.

The small tribe of just 800 enrolled members submitted its proposal to Charles Chapel, a retired Oklahoma Criminal Court of Appeals judge, for arbitration, asking whether an online poker venture would violate its compact with the state.

According to the Indian Gaming Regulatory Act of 1988, tribes are permitted to offer Class II gaming (defined in the act as poker and bingo) on sovereign land, without a formal dispensation from the state.

Chapel wrote in his ruling that the “use of the Internet is merely using technology to play covered games as a way to increase tribal revenues. It does not extend or restrict the scope of the games and does not amend the compact in any way.”

Ready to Launch “Within Weeks”

Now the tribe has initiated legal proceedings in the United States District Court for the Western District of Oklahoma, seeking federal certification of the arbiter’s ruling.

Should it receive a positive decision, the tribe and its software partner, Universal Entertainment Group (UEG), say they could be ready to launch “within weeks” of a ruling.

It is, of course, unlikely to be quite that simple.

In 2014, UEG had a similar deal with the Cheyenne and Arapaho Tribes of Oklahoma to launch a very similarly named site, called pokertribes.com (the only difference being the plural “tribes”).

Oklahoma OK’d the project, ruling that the tribes were not in violation of their compact, provided they were targeting customers outside the US.

However, the US Interior Department disagreed and wrote to the tribes to this effect.

A subsequent lawsuit to challenge the department’s decision was ultimately abandoned, along with the entire project, following the election of a new tribal leader.

Meanwhile, also in 2014, but in California, the Iipay Nation of Santa Ysabel’s attempt to launch Class II online gaming was met with injunctions and lawsuits of both a state and federal nature.

Unlike the Oklahoma tribes, however, the Iipay Nation intended to offer its services only to residents of California, where online gaming is as yet illegal.

A tribe providing online gaming to an international and US regulated markets (such as Nevada, New Jersey, and Delaware) would be viewed more favorably, but this does not mean it would necessarily be permitted to proceed.

In the unlikely event of federal approval, the Iowas could pave the way for tribes, not just in Oklahoma, but also all across the US, to follow their example.

However, should pokertribe.com actually get off the ground, it would remain a tiny player struggling for liquidity in a vast international market and the road to success would be a long and difficult one.

I hope the Iowa tribe succeeds . Perhaps , sometime after providing a functioning , legal ,international market, the site would be allowed to sell out to a larger enterprise .

Still got that pesky UIGEA to deal with. It is the UIGEA that is the problem, not the lack of, or existence of, any legislation (at any level) that keeps us Free Americans from participating in a specific game.