The Oakland Raiders will soon be skipping town and heading south to the desert. NFL teams voted 31-1 on Monday to approve the team’s relocation to Las Vegas. Only 24 franchises needed to vote “yes” to make it a done deal. The Miami Dolphins were the lone organization that voted against the move. 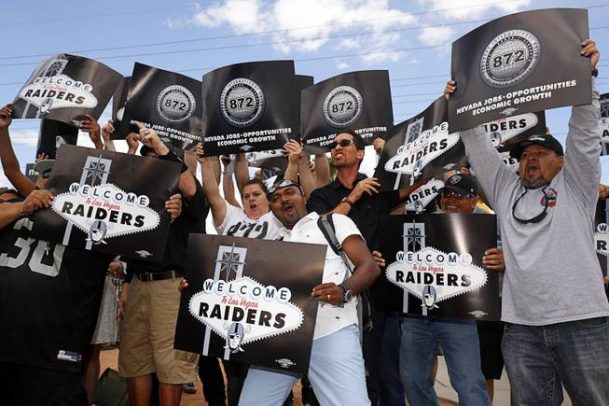 Team owner Mark Davis began flirting with the idea of moving the Raiders to Sin City over a year ago. With no long-term stadium deal in place in Oakland, Davis began pursuing other options.

He wanted a new stadium instead of continuing to play in what many consider the worst NFL venue, Oakland-Alameda Coliseum.

The city of Las Vegas, along with Nevada Governor Brian Sandoval, stepped up and offered to help finance a brand-new stadium for the Raiders in Sin City. But an investor would be needed to cover a large portion of the costs.

That person was supposed to be Sheldon Adelson. He was a natural fit given that he is a billionaire and owns a casino, the Venetian, in Las Vegas. He originally committed to investing $650 million of the $1.9 billion needed to fund the stadium. The rest would come from an added city hotel tax that tourists would pay for.

In January, Adelson decided to take his ball and go home. He backed out of the deal, leaving the Raiders in a bit of a pickle. The team had no long-term Oakland stadium deal in place and without a new investor, there would be no move to Las Vegas.

Earlier this month, Bank of America stepped up and vowed to pick up the slack Adelson left behind. When the bank offered to invest, other league owners breathed a sigh of relief.

Adelson has the financial means to help fund the move. But there were some NFL owners who weren’t all too excited for a casino owner to be closely linked to a pro football team. Sports betting is prevalent in Las Vegas.

What this Means for Las Vegas

The proposed stadium isn’t expected to open until 2020. Mark Davis has already announced the team plans to remain in Oakland through 2018. That means the Raiders will need to find a temporary home in 2019. Las Vegas’ only football stadium, Sam Boyd Stadium which is home to the University of Nevada-Las Vegas, is far too small for an NFL team.

The city, already a tourist hotspot, will have even more travelers in town on NFL Sunday’s. And the poker players who reside in and visit Las Vegas won’t have to worry about supporting a team Sheldon Adelson is a part of.