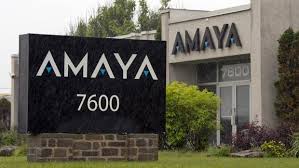 Amaya’s Montreal head office which was raided by police and the provincial financial regulator last December. No evidence has been found of irregularity, says the company. (Image: theglobeandmail.com)

Amaya Inc has completed the sale of Cadillac Jack, its slot machine subsidiary, to AGS for $380 million.

The sale is indicative of broader strategy for Amaya as it seeks to divest itself of its old B2B offerings in order to concentrate on its powerful new B2C offering, PokerStars, and to recoup some of the debts incurred during the $4.9 billion buy-out of the online poker giant.

Amaya expects to raise a further $28 million from the sale of a 60 per cent stake in its lottery and gaming business, Diamond Game Enterprises, and has agreed to the sale of Chartwell and Cryptologic to NYX Gaming Group Limited.

“Cadillac Jack has expanded its business greatly under Amaya’s ownership to the credit of its management and its employees,” said Amaya chairman and CEO David Baazov. “It has enhanced its operational efficiencies and expanded its business both geographically, including acquiring multiple US state commercial licenses, and by markets, including expansion in Class III and online gaming. We anticipate its combination with AGS will expedite the company’s growth strategy.”

The company also took the opportunity to reassure investors about an ongoing investigation into alleged insider trading in the run up to Amaya’s acquisition of the Oldford Group.

According to search warrants and affidavits released from a publication ban, the AMF was granted approval to confiscate computers and electronic security devices from three Amaya staff members whose names have been redacted from the document.

However, it’s believed that both Baazov and chief financial officer Daniel Sebag were involved in the investigation in some way.

“No Evidence of Violation”

“To date, the AMF has neither threatened nor initiated any legal proceedings against the corporation or its employees,” said Ben Soave of Amaya’s Compliance Committee. “Amaya has also not been provided with any evidence that any officers, directors, or other employees violated any securities laws or regulations.

“Nonetheless,” he continued, “as we previously announced, the corporation conducted an internal review, supervised by its independent board members with the assistance of external legal counsel, which thoroughly reviewed the relevant internal activities surrounding the Oldford Group acquisition. This review found no evidence of any violations of Canadian securities laws or regulations.”

Baazov reiterated that the group had been cooperating with the investigation and expected to be fully exonerated. “I believe that any concerns that I or other Amaya officers or directors violated any Canadian securities laws are unfounded and we are confident that at the end of its investigation, the AMF will come to the same conclusion,” he said.