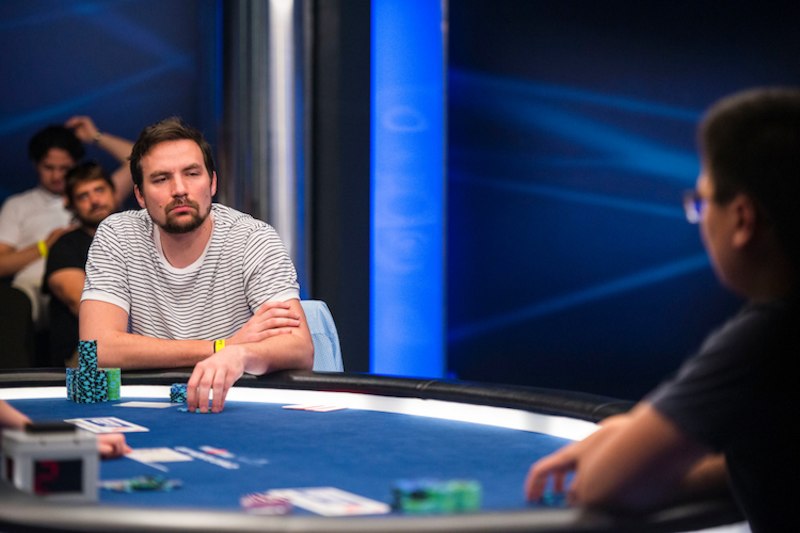 Dumont, who only had six previous recorded tournament cashes, none of which were for more than €9,500, had to earn this victory by outlasting some great players on the final day, including high stakes legend Patrik Antonius, 2016 GPI Player of the Year David Peters, and German superstar Ole Schemion.

To conclude a tough heads-up battle that saw the chip lead go back and forth, Dumont finished off Jiang by being sneaky with pocket queens.

Jiang thinks for a minute before shoving all-in for around 10 million and got snap-called by a slightly larger stack. The board ran out 7♦K♣3♦8♥3♠. Game over.

A Legend is Born

Gyorgyi, a Hungarian, won a $5 satellite on PokerStars into the EPT Monte Carlo Main Event and parlayed that into a 5thplace finish and €184,000, a heck of a payday for a man who previously had minimal poker success. But he’s now a legend for this incredible bluff against Tomas Jozonis and hilarious reaction.

“This is good for TV,” Antonius said in response to the bluff. Daniel Negreanu, on Twitter, agreed with that assessment.

If there’s a silver lining in it for Jozonis, he outlasted Gyorgyi, finishing in 3rdplace.

Schemion was the first to go on Friday after he lost a 60/40 situation to Peters and Antonius who chopped the pot. Fernandez was next to be felted, getting it all in pre-flop with a smaller ace than what Jozonis was holding, and the best hand held up.

Shortly after, Antonius ran into Dumont’s quad kings and lost a massive pot that crippled the high stakes legend. Despite doubling up through Jiang, he was eliminated just over an hour later by Dumont in a coinflip situation.

A half hour later, it was Gyorgyi’s turn to lose a coinflip, this one against Jiang, and he was sent to the rails in 5thplace. Peters then was dealt a cooler as his pocket jacks ran into Jozonis’s queens, and that was all she wrote for the 2016 GPI Player of the Year.

But Jozonis still had a small stack and was eliminated by Jiang moments later when his ace-rag couldn’t beat a bigger kicker. That left Jiang and Dumont to battle it out for the title, and you already know the ladies won this event for Mr. Dumont.

Well done from Dumont, I am surprised that Jiang did not fold pocket 6’s, huh …

Even against top set in that spot he is 25% , Hard to put him on KJ or J8 Because of the pre flop action and not to mention the guy visually looked weak… anyone who am I to judge these guys are far better then me…..for now..