The inaugural World Series of Poker Circuit stop at California’s Thunder Valley Casino Resort wrapped up over the weekend, with poker pro Nick Pupillo taking down the Main Event for $170,286, a seat into the 2018 Global Casino Championship, and his second gold ring. 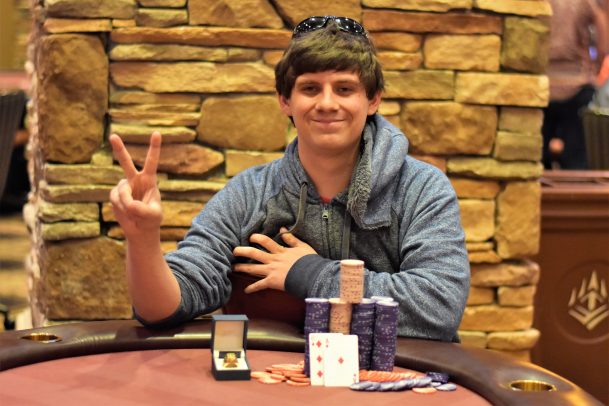 It’s been a career month for Nick Pupillo, who has notched the two biggest scores of his life and clearly seems to be upping his game to new levels. (Image: WSOP)

The $1,675 Main Event attracted 528 runners, which created a $792,000 prize pool. One of those players was 25-year-old Nick Pupillo, who flew all the way from the East Coast to compete, apparently at the behest of poker grinder Allen Kessler.

“Wow, I recruited [Nick Pupillo] to come to @TVPokerRoom all the way from @BorgataPoker this a.m.,” he tweeted. “He just got here and late regged @wsop main.”

Pupillo ended up making it to heads-up play against Dann Turner. In the final hand of the tournament, Turner got it in with Ax6x and was pipped by the A♦5♦ of Pupillo. Turner pulled ahead on the J♦5♠2♥ flop, and he was one card away from doubling after the 8♠ appeared on the turn. Unfortunately for him, the 6♠ spiked on the river to give Pupillo a pair and the win.

It marked the second six-figure score in three weeks for Nick Pupillo, who finished runner-up to Marshall White in the $600 buy-in Borgata Poker Open DeepStack Kick-Off Event for $217,535. That means the poker pro from Addison, Illinois, now living in Arizona, has notched the two biggest scores of his career within 20 days and brought his lifetime winnings up to $1,317,356

“It feels great. It’s been a while, I think 2016, since I won a tournament,” Pupillo told WSOP officials after the win. “So, it feels awesome. I’ve had a lot of ups and downs in my career. I struggled with, like, money management and stuff like that, but things are turning around. Better now.”

The Main Event was just one of a dozen ring tournaments at this circuit stop. In the $2,200 High Roller, poker pro JC Tran topped a field of 58 entries to win $43,500. He now has two gold rings to go with his two bracelets.

“I always like to come out here to Thunder Valley since it’s like 20-25 minutes from my house and you know, I like this poker room a lot,” said Tran, who was fresh off a WPT final table. “I see a lot of friends and faces that I used to play with a lot coming up in Sacramento.”

Another player to do well was Event #5 champ Brett Murray, who won the title of Casino Champion after amassing 122.5 points in the five events in which he cashed. That made him Thunder Valley’s second player to lock up a seat into the 2018 Global Casino Championship.

The WSOP Circuit’s next stop is already underway at the Seminole Hard Rock in Hollywood, Florida, and will run through Oct. 2. The tour will return to Thunder Valley Casino Resort in January 2018.