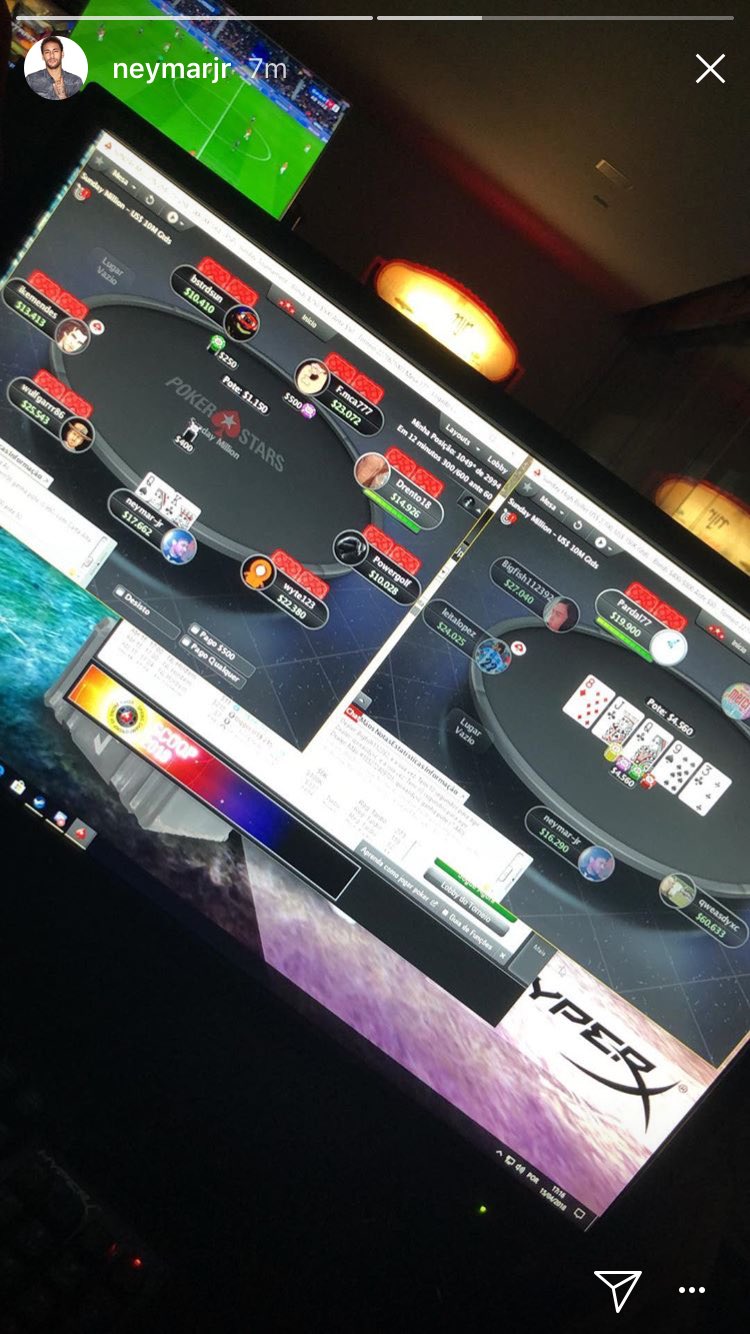 Neymar Jr. posted this pic of the action that mattered to him on Instagram as his teammates were on in the background. (Image: Instagram/NeymarJr)

Despite being sidelined with a cracked metatarsal, the PSG striker has been widely criticized for not being there in person to support his teammates as they beat Monaco 7-1.

As Angel Di Maria and the rest worked to secure victory over Monaco and clinch France’s Ligue 1 title on April 15, Neymar Jr. was in Brazil playing on PokerStars.

As per his story timeline on Instagram, the sponsored poker enthusiast was playing two tournaments. Although unclear, the images captured by GFFN Match Zone appear to show Neymar Jr. playing the Sunday Million and a satellite to PokerStars’ $10 million guaranteed Sunday Million, which gets underway April 22.

In response to the images, a number of PSG fans lambasted the star player for showing a lack of commitment to the team.

“Neymar not at the Parc to celebrate his team’s (and employer’s) title because he’s playing poker,” Jeremy Smith tweeted. “I’d suggest the fact that this kind of thing is allowed to happen goes a long way to explaining their failure to progress in the Champions League.”

When PSG acquired the Brazilian from Barcelona in August, the transaction broke the game’s transfer record. However, just a few months after the €222 million ($274 million) move, rumors started to circulate the Neymar Jr. was unhappy in France.

February reports by local media L’Equipe and Sport both suggested that he was already planning to leave the club at the end of the season. Although the man himself hasn’t spoken publicly about his thoughts on PSG, the latest incident only seems to support the rumors according to some.

“Shock prediction: he’ll ask to leave in the summer. Or before, probably,” reads the concluding line of an April 16 article by Le Buzz.

While it’s unlikely Neymar Jr. will struggle to find a club willing to take him, a deep run in the forthcoming anniversary Sunday Million would certainly give him a bundle of cash to fall back on.

Everyone in the world, Neymar included, is completely free to do what they want at their spare time.

If he likes poker, then he can play as much poker as he wants. He doesn’t take anyone else’s monies. Of course his acquisition from PSG was an utter failure and I think he is finished from the club. I don’t know which will be his next team, probably Real Madrid. We will see…..

the guy cant play football he is injured, i dont see why its a problem to play poker and not go support you team in their game, may be real madrid is the cause lol who knows, may be we will see him next year playing with ronaldo