Neymar Jr is more than just a young soccer star. The 25-year old Brazilian hosted a celebrity charity home poker game to raise money for a good cause. 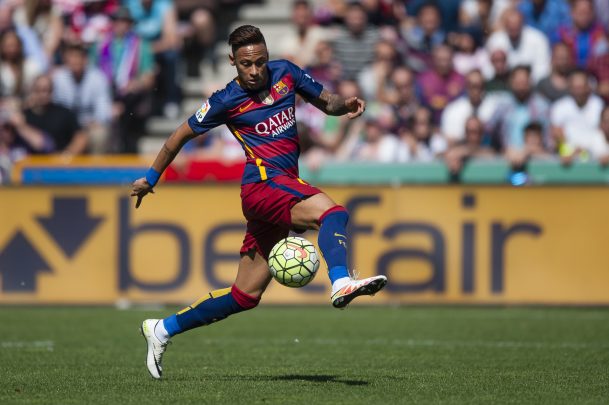 The FC Barcelona forward helped raise €52,300 for his own charity, the Neymar Jr Institute. His charity, located in his home country Brazil, provides sporting activities for underprivileged youth. The education complex includes classrooms, playing fields, and a swimming pool.

Although raising money for a good cause was the main focus of the evening, there was a poker tournament with a top poker player and some celebrities. The star of the evening was long-time poker pro Andre Akkari.

The best player in the field of 15, Akkari, came out victorious. Hockey star Fatima Moreira, an Olympic athlete, also competed in the tournament. PokerStars sponsored the event. Neymar was proud to see his poker coach come out victorious.

Akkari, a fellow Brazilian, has more than $1.5 million in lifetime live poker tournament winnings. He is third on Brazil’s all-time list. Alexandre Gomes leads the way with $3.4 million.

For Love of the Game

When Neymar’s soccer career comes to an end, who knows, maybe he’ll chase some World Series of Poker bracelets. Poker is more than just a hobby to the superstar athlete. He’s a Team PokerStars member, along with fellow soccer great Cristiano Ronaldo.

“Poker is a huge passion of mine. It allows me to express myself away from the pitch, and I love any chance to outwit my opponents, show my skills, and beat the competition. Now I want to push myself against the world’s best players,” a quote from his player profile reads.

On the pitch, Neymar is one of the best in the world. He now plays for FC Barcelona, a top Spanish pro club. Before transferring to a European squad, he was twice named South American Football of the Year (2011, 2012). He scored 50 goals in 74 games for his home country.

In 2013, Neymar made the surprising decision to sign with Barcelona. That move didn’t come without criticism. It even nearly landed the athlete in jail.

In January 2014, the Madrid, Spain prosecutor’s office began investigating the transfer fee Barcelona paid to acquire the Brazilian. His new team ended up being charged with tax fraud for hiding a large sum of the money it paid to sign Neymar.

Neymar and his father also ended up in some hot water for the incident. A Brazilian alleged he owed $16 million in unpaid taxes in 2015. His legal issues have since cleared up. He can now focus on dominating on the pitch and playing poker.

It’s my favorite football player ever!!