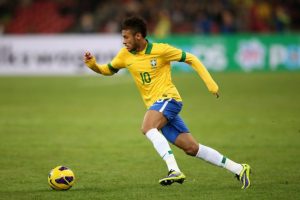 All eyes will be on Neymar when the Olympic Games begin next month in Rio de Janeiro. The 24-year old Brazilian soccer star will face the same kind of pressure he would in a major poker tournament. Maybe more.

And Neymar knows all about competing on the felt as much as he does on the pitch. He’s a PokerStars Sport Pro and has a passion for the game of poker.

But his focus right now is on winning a gold medal for his native land. Anything less, in a soccer crazed country such as Brazil, is unacceptable to many of its citizens. Violence has been caused on multiple occasions over soccer losses in that country.

While soccer is a team sport, the superstars get most of the credit after a win, and much of the blame following a loss. Phil Hellmuth faces similar scrutiny. In years the Poker Brat wins bracelets, he’s considered a king. When he doesn’t, like this summer, the critics on social media question his talent. Such is the nature of the beast.

Neymar’s coach on the Brazilian national team, Tite, told reporters his squad isn’t reliant on the 24-year old and called it “inhumane” to put so much pressure on him. The comments, however, are unlikely to change anyone’s mind.

“Obviously the technical quality of an individual is important but you can’t expect one player to do everything,” the coach said, hoping to take some heat off his biggest star.

The poker player will have a different coach during the Olympics. Roger Micale will have the difficult task of preparing a high-profile soccer team to meet expectations. The team will make its Rio Games debut August 4 against South Africa.

Neymar isn’t the only athlete who takes poker seriously. The game is popular among athletes in many sports. Poker presents an alternate way for them to compete.

Doyle Brunson, one of the greatest poker players of all-time, was on the verge of playing professional basketball before entering the poker world. UFC fighter Randy Couture plays poker. He even competed in a Poker After Dark match.

Athletes such as Neymar enjoy the competitive aspect of poker. These are competitive individuals by nature. Poker provides another way for them to get an adrenaline rush, especially at the high stakes level. Neymar may not feel as much pressure to win a poker tournament as he will next month in the Olympics, but victory is just as sweet.