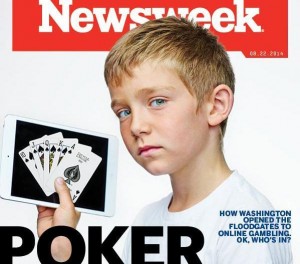 The poker industry was left reeling following the publication of a Newsweek article that attacks online gambling, and specifically online poker, in a manner which commentators say is biased, alarmist and disingenuous. Splashed across the front cover of the latest cover is a sad-faced young boy holding up a tablet displaying a poker hand, inconsolable that online poker has taken his innocence.

“How Washington Opened the Floodgates to Online Poker, Dealing Parents a Bad Hand,” screams the header.

The piece, by Leah McGrath Goodman , begins by criticizing the Department of Justice’s (DoJ) Office of Legal Counsel and its employee Virginia Seitz, whose legal opinion led to the reinterpretation of the Wire Act, which “opened wide the door to online gambling, and … may have opened a Pandora’s box,” and then proceeds to focus on “slots for tots,” which apparently target America’s youth.

Barking Up the Wrong Tree

The article contains numerous factual inaccuracies, oversights and simplifications of complex gaming law, most of which are dealt with excellently by Chris Gove at Online Poker Report (a must-read), but perhaps the most crucial oversight is that the journalist fails to distinguish between regulated and unregulated online gambling in America.

The titular “floodgates” presumably relate to the fact that three states have chosen to regulate online gambling in the three years since the reinterpretation of the Wire Act, and two or three may follow, but this is hardly a deluge. The issue of protecting minors from gambling is a hugely important one, and the three states have worked hard to implement strict age verification processes so that this is not a problem, but there is no mention of this. In fact, the protection of minors is one of the main arguments for regulation.

Instead, there are statements such as: “Many sites assume players are old enough to play if they simply enter a credit card.” This is simply untrue of the sites regulated by the new US jurisdictions. In fact, it’s also untrue of most of the illegal offshore sites too. Discovering this, however, would require research beyond listening to the hyperbolic opinions of people like Rep. Jason Chaffetz, whom the author quotes liberally and unquestioningly.

“This is just the beginning,” Chaffetz, who has called for a federal ban on online gambling, tells Goodman. “I am afraid that if we don’t move quickly and get some decent regulations in place, which we really don’t have right now, it will be too late to stop it from reaching all the states.”

Criticism was almost universal in the comments posted below the piece, with many calling into question the impartiality of Newsweek and even accusing it of being in Sheldon Adelson’s back pocket.

One commentator, Richard Muny of the Poker Players’ Alliance, stated: “Wow…what a one-sided opinion piece. No quotes from the pro-poker side and no data on the sites in New Jersey, Nevada and Delaware up and running now, not to mention that of sites running in Europe and elsewhere for over a decade. Nothing but opinion, cherry-picked supporting quotes, and personal attacks on a DoJ attorney who interpreted the Wire Act as it’s written, rather than by how some with agendas sought to twist it.”

That sentiment seemed to be shared by many.

It’s so sad. The Idea that parents should control how and what children access on the internet is gone out the window and it is everyone else’s responsibility. Then using that as fear mongering to create fear is terrible and extremely sad.