The New York Yankees, fresh off a surprising season that culminated with an appearance in the ALCS, are now favored to win the 2018 World Series following the acquisition of slugger Giancarlo Stanton from the Miami Marlins. 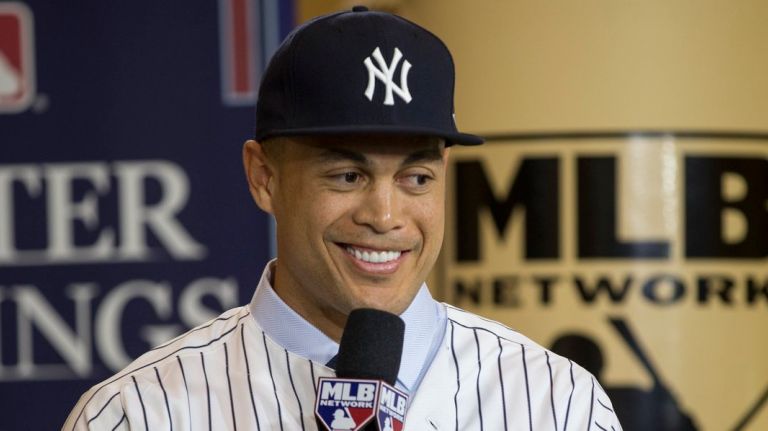 Acquiring Giancarlo Stanton in a trade with the Miami Marlins made the New York Yankees the favorites to win the 2018 World Series. (Image: Willie Allen/Associated Press)

Acquiring Stanton, a 28-year-old outfielder who led baseball with 59 homers in 2017, will help the Bronx Bombers get over the hump next season, so say Las Vegas oddsmakers.

Prior to the acquisition, the Yanks were given 11-1 odds to win the franchise’s 28th championship. After trading for baseball’s most feared power hitter, those odds jumped to 5-1, making New York the favorites to win the World Series.

The defending champion Houston Astros and World Series losers, the Los Angeles Dodgers, check in at 6-1 to win it all, as of December 12. The Cleveland Indians (15-2), Boston Red Sox (10-1), and Washington Nationals (10-1), round out the top five most likely World Series champions, according to Las Vegas sportsbooks.

Miami is in rebuilding mode coming off a 77-85 season and missing the playoffs for the 14th consecutive year. The Yankees, on the other hand, came up one game short of earning a trip to the World Series and expect to get even further next season.

Naturally, it made sense for a rebuilding team to trade away its star player with $285 million remaining on his contract to a wealthy team that is in win-now mode. But some believe Marlins new CEO Derek Jeter, a legendary Yankees shortstop, gift-wrapped Stanton to his former team, getting questionable value in return.

The trade should have a significant impact on both teams. Hence, the massive shift in World Series betting odds. The Yankees picked up a bat that could be unstoppable in the hitter-friendly Yankee Stadium. And the Marlins are likely to regress without its best player.

With Stanton and Aaron Judge, the only players who hit more than 50 homers in 2017, in the middle of that lineup, the Yankees’ offense will be a nightmare for opposing pitchers. These two outfielders combined to hit 111 home runs last season. That’s just 17 fewer than the entire San Francisco Giants hit.

Adding a superstar to an already strong lineup convinced many bettors to jump all over the Yankees. As for the Marlins, well, there isn’t much hope among the fanbase to make the playoffs, let alone win the World Series. After the Stanton trade, Miami went from a 66-1 underdog to win it all to an even less assuring 100-1. Only the Detroit Tigers (150-1) are considered less likely to hoist the Commissioner’s Trophy next fall.

The Yankees weren’t the only team to make a splash last week. The Los Angeles Angels signed 23-year-old Japanese sensation Shohei Ohtani, a two-way player, and saw its longshot 50-1 odds to win the World Series cut to 25-1.

Ohtani is considered by many scouts the best prospect to ever come out of Japan. If he truly is better than Ichiro Suzuki, a future Hall of Famer who has over 3,000 hits, the Angels could be considered a value bet.

The Angels are still in search of more pitching to improve their lackluster rotation and bullpen. Ohtani, clocked at over 100 MPH, could provide a spark in the rotation and as a part-time designated hitter, a spot currently patrolled by an aging Albert Pujols.

Now might be the time to jump on the Angels at 25-1 odds. If Los Angeles can make a few more key moves, one of them possibly being the rumored signing of free-agent third baseman Mike Moustakas, this team could be a World Series contender.

Maybe the acquisition of Giancarlo Stanton gives them more power to the offensive along with Judge, but it is still early to say that they will win the next season, it will be exciting to see these two great talents together, just wait and the time will give the answer.