NY State’s Rivers Casino Poker Room Has Problem Most Would Envy: Too Much Business

It didn’t take long for players jonesing to see some tournament action at the recently opened Rivers Casino in Schenectady, New York to get their wish. Just two months after opening its doors, the resort announced it would host daily Texas Hold ’em tournaments in the 15-table poker room at the upstate facility. But there was a twist. 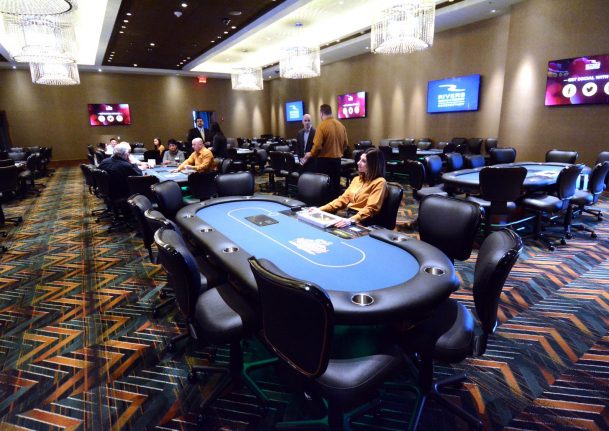 The Rivers Casino in Schenectady, New York will be holding daily Texas Hold ’em tournaments during its slower hours in the resort’s 15-table poker room. The newly opened room is wrestling with a problem many land casino rooms would love to have: a glut of customers during peak hours. (Image: Daily Gazette)

The statement was a positive report after the property experienced a few operational stumbles, including customer complaints, significant employee turnover, and a $6,000 fine for an underaged gambler who managed to get in and play.

Casino officials said it was receiving scores of requests from customers for the poker contests. The game has been one of the more popular areas of the floor since the facility’s debut on February 8 and has contributed its part towards the $10.8 million that Rivers has netted after payouts in the first month alone.

Because of the popularity, those running the poker room had to figure out when to hold the competitions. Most evenings and weekends were out, since the 150 seats were mostly filled during that time. That issue reflects a trend that’s also hit in Nevada, where although online poker is low on gas, brick-and-mortar rooms have been pulling their weight quite nicely of late.

Rivers’ room settled on Monday through Thursday at 9:30 a.m. and a Monday night slot at 6:30 for the poker events. The schedule will run through April and then be assessed, based on its success. The contest’s $60 + $15 structure with rebuys until after the fourth level is clearly aimed at a recreational player demographic.

There were definitely some growing pains for the Empire State’s newest place to wager.

Some patrons complained that there weren’t enough places to eat and not enough gaming staff, as well as crowded table games where they found it difficult to gamble.

Danny Brockdorf, vice president of marketing, told Schenectady’s The Daily Gazette that executives were addressing any concerns and utilizing staff meetings and camera surveillance for some issues.

“We’re open 365 days a year, 24 hours a day, seven days a week, so our leadership can’t always see everything that’s going on,” he said. “That’s the great thing about this area, is we get lots of feedback.”

Rivers casino is operated to squeeze every last penny from its customers (pay for drinks at the tables & slots.
expensive food, poor gambling conditions. It’ll come back to bite them.