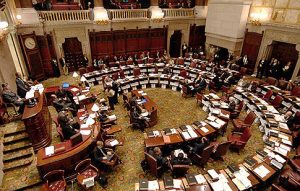 New York online poker could still become a reality in 2016 after Senator John Bonacic’s bill passed through the Senate Finance Committee on June 2.

Despite some uncertainty surrounding New York’s online poker (technically known as S5302) bill in recent months, the latest vote of confidence by the Senate Finance Committee has given players a renewed sense of optimism.

Positive Vote but Not a Done Deal

After passing through the Senate Racing, Gaming and Wagering Committee in February, Bonacic’s bill was amended in May and is now sitting on the Senate floor calendar.

While the chances of the bill passing into law this year are still slim, it’s worth noting that the latest vote saw S5302 progress by a margin of 20 to 8.

However, while it’s important to take some positives from the latest vote, it’s also important to remember that we’re still a long way from seeing legal online poker in New York.

As yet there have been few real discussions in the Senate about the bill and if any legislation is to pass this will have to happen.

Although the recent signs would suggest that S5302 has a strong chance of doing well in any open discussions, anything can happen in the complex world of legal and political debates.

It’s All About the Money

From a financial perspective there seems to be every reason to regulate online poker in the state. At present the proposed tax rate for operators is 15 percent after a $10 million licensing fee has been paid.

If these conditions are agreed on, industry insiders estimate that the market could be worth $120 million in year one which would make it the richest online poker economy in the US.

Although New Jersey’s online gaming operators generated $148.8 million in revenue throughout 2015, only $23.8 million of that total came from poker.

However, for those with long memories, it’s also worth noting that New Jersey Governor Chris Christie was similarly ambitious back in 2013.

Just as iGaming regulation became a reality in New Jersey, Christie predicted that it would generate $1 billion in revenue by July the following year. Unfortunately, that optimism was slightly misguided as New Jersey hasn’t come close to that figure.

While that’s not to say New York’s online poker economy can’t be as buoyant as some are predicting, it is worth remembering that until regulation passes and players start playing, anything can happen.