The success of New York’s online poker bill, S 3898, can be measured in inches, but at least it’s moving forward. On Tuesday, the state Senate Finance Committee approved legislation that would make New York the fourth and most populous US state to welcome legal and regulated online poker. 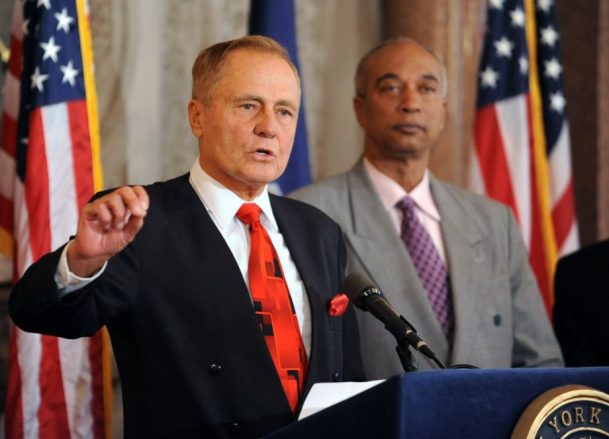 New York Republican Sen. John Bonacic (l) believes a bill legalizing online poker has a good chance of passing this year, particularly with Democratic Rep. Gary Pretlow (r) on board to help move it through the Assembly. (Image: Times Union)

The bill now goes to the Senate, where a majority vote would send it to the desk of Gov. Andrew Cuomo for his signature. But before a swipe of the pen can legalize online poker in the Empire State, the bill has a few more steps to navigate before poker players should celebrate.

First, a series of back-and-forths among senators is required before a vote can be put on the senate calendar. Then, the lawmakers repeat the process to include amendments and other revisions before being put to a vote. The other chamber, in this case the House, has to approve an identical bill before it can be sent to the governor.

Previous efforts to legalize online poker in New York have hit stumbling blocks along the way. But Sen. John Bonacic (R), the bill’s sponsor, remains optimistic that this time it’s ready to pass.

Approval through the senate should not be a problem. Bonacic chairs the Senate Racing, Gaming and Wagering Committee, and it passed that group easily. Also, last year’s attempt in the senate received support by a 53-5 margin.

The difficulty will be with legislators in the Assembly. Last year they simply ignored the Senate-approved bill, letting the session expire without giving online poker any consideration.

The Assembly also took a provision out of the state budget to accommodate money related to online poker earlier this year, and many took that as a sign members were still unwilling to budge.  But Bonacic cites new bipartisan cooperation from Assemblyman Gary Pretlow (D), as being critical to the effort.

Pretlow has previously expressed concerns about online poker, but seems more open to the activity this year. He told reporters that while some in the Assembly were opposed, the sentiment against it wasn’t strong. “I don’t really see there’s going to be much opposition to moving [online poker legislation] along,” Pretlow said.

If he did so knowingly, it would be illegal, as Baazov is Canadian, not American, which would make such a donation a matter of election interference from a foreign source. However, charges that brought the donation to light involve someone allegedly trying to hide the source of the campaign contribution.

So it is unlikely anyone will see Cuomo as having violated federal election laws, even though the purpose of Baazov’s donation allegedly was to encourage Cuomo to sign an online poker bill like the one the Senate eventually hopes to send him.