The battle to legalize gaming in the state of Kentucky has so far been a long and unsuccessful one, but a new bill that popped up this week is breathing new life into the possibility — and it includes a provision for online poker. 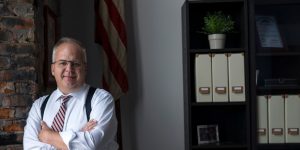 Republican Representative Adam Koenig tweeted that he was excited to file House Bill (HB) 175 this week, a measure which will mainly push for sports betting but would also cover online poker and fantasy sports.

“It’s time to provide the freedom for those who wish to engage in these activities to do so legally,” Koenig said in a tweet Wednesday. “Let’s be ahead of the curve in Kentucky!”

Bill S 22, which was introduced more than a year ago, was the most recent attempt to legalize sports betting in the state, and before that, other bills have come and gone with no success over the years.

But this new bill is the first to be introduced in Kentucky since the US Supreme Court struck down a federal ban on sports betting last spring.

And poker is mentioned no less than 12 times in HB 175, which would amend a statute to “create a new section … to require licensure for online poker.”

Early reaction to the introduction of the bill and its potential to make online poker a reality in the Bluegrass State has been overwhelmingly positive.

“Awesome,” replied one Twitter user, “online poker deserves to be legalized for all Americans to play. Good first step. It is a game of skill, and good source of revenue.”

Other suggested that the passing of such a bill would be enough for them to pick up stake.

“Thank you. I would love to move back to my home state when this bill passes,” said one user, while another called Koenig a hero.

The Poker Alliance even piped up on the topic, throwing its support behind the Senator’s quest to finally legalize the game.

Big thanks to Rep. Adam Koenig @repkoenig for his continued leadership for sensible iPoker policy in Kentucky. Let us know how we can help you! https://t.co/sDrbfIZMmb

It’s not all pocket aces, however.

Even if the bill passes, recent changes in federal legislation mean that any poker ecosystem in Kentucky would likely be fenced in and unable to play against an international pool of players, or even players in other states.

That’s due to the recent reinterpretation of the Wire Act by the Department of Justice which bans all gaming across state lines.

The chilling effects of that ruling are already being felt in Pennsylvania. The state was expected to join the existing shared player pool between Nevada, Delaware, and New jersey early in 2019, but regulators there are warning operators that all gaming operations “now must be entirely intrastate.“

It may not be the dream scenario, but it will at least be a start if legislators can pass the new bill.

“online poker deserves to be legalized for all Americans to play” – yep. can agree on that. =)
“now must be entirely intrastate” – why? does it not bother you that internet gaming is prohibited by a law for cord lag?
“It may not be the dream scenario, but it will at least be a start if legislators can pass the new bill” – as it does every time.

Whith a wierd political climate in US I do understand that poker is not on the minds of most people and there a much more pressing matters, but… cmn for almost 10 yers now….10!
GLGL anyway

It’s bureaucracy for everything. “It’s time to provide the freedom (in other words, tax collection) for those who wish to engage in these activities to do so legally (because before that we had no freedom, right?)” What a joke!