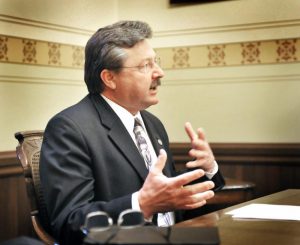 Michigan State Senator Mike Kowall whose bill has the potential to open the state up to international liquidity sharing if it is successful. (Image: michiganradio.org)

Michigan lawmakers introduced an online poker and casino bill apparently out of the blue Friday. Dubbed The Lawful Internet Gaming Act and sponsored by State Senator Mike Kowall (R-15th), SB 889 seeks to establish a framework of legislation that would allow up to eight Michigan land-based casinos to offer internet poker and casino games to Michiganites and beyond.

Significantly, language in the bill suggests that SB 889 could be aiming for not just interstate liquidity-sharing but also might be dipping into the international pool. It states:

…a wager may be accepted from an individual who is not physically present in this state if the division determines that the wager is not inconsistent with federal law or the law of the jurisdiction, including any foreign nation, in which the individual is located or that the wagering is conducted under a multijurisdictional agreement to which this state is a party that is not inconsistent with federal law.

Of the states that have opted to regulate so far, Nevada and Delaware currently share a player pool, while it’s understood that New Jersey has “held discussions” on the issue with Nevada. However, New Jersey’s Constitution dictates that gambling operators must be headquartered in Atlantic City, which complicates the matter of liquidity sharing. Thus, should SB 889 ever become signed into law, Michigan, with a similar population to New Jersey, could eventually have a big advantage over other regulated states.

The bill also seems to be astute on taxation, too, opting for a 10 percent tax on gross gaming revenue, which should be low enough to allow operators to remain competitive with the unregulated market. There would also be a $5 million licensing fee, renewable every five years for $100,000.

“Internet wagering on games of chance and games of skill is a core form of entertainment for millions of individuals worldwide,” states the bill. “In multiple jurisdictions across the world, Internet gaming is legal, regulated, and taxed, generating billions of dollars in revenue for governments.”

“In order to protect residents of this state who wager on games of chance and skill through the Internet and to capture revenues and create jobs generated from Internet gaming, it is in the best interest of this state and its citizens to regulate this activity by authorizing and establishing a secure, responsible, fair, and legal system of Internet gaming that complies with the United States Department of Justice’s September 2011 opinion concerning [the Wire Act].”

Michigan is one of three states that operates an online lottery and one of only two that permits the sale of “Instant Win” online scratch cards.