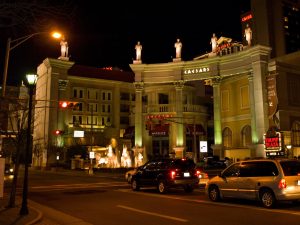 New Jersey has seen gradual improvements in its online gambling numbers in recent months, but that success hasn’t been enjoyed equally across all games.

Online poker has failed to capitalize on that growth, and in fact slumped heading into the summer months, leading many to wonder whether the state would need something to reinvigorate the market in order to stop a gradual slide into irrelevancy.

While the state’s online poker market could still use some help, it does appear as though the slide might be coming to an end.

According to figures from PokerScout and PokerIndustryPro.com, cash game traffic at New Jersey online poker sites has rebounded in July, perhaps signaling an end to the seasonal decline that appeared to be taking hold for the summer.

That doesn’t mean that interest in online poker has suddenly exploded in the Garden State: we are talking about modest gains, not a sea change for the industry.

But with worrisome numbers being released every month, even a small step in the right direction is welcome news.

As of Tuesday, the average cash game traffic for the past 30 days is up about 3 percent compared to where the state was at the end of June.

That number is up even more if you look as just the past week of play: the sites have averaged about 300 cash game players over the past seven days, a number that hasn’t been seen since April.

All of this means that at least a slight uptick in revenue is likely in July. That should be comforting news to both the casinos running these sites and online poker fans in general who want to see New Jersey’s poker market succeed.

In June, online poker brought in just $1.8 million for Atlantic City casinos, down over 10 percent when compared to the $2 million they made in June 2014.

That year-over-year decline was in stark contrast to what was happening in the casino games sector, which was up about 32 percent in June; for 2015 as a whole, Internet poker revenues are down more than 26 percent while overall online gambling winnings are up 28 percent.

One factor in the year-over-year decline is the loss of Ultimate Poker, which shut down last September.

However, the site was only a minor player in the market (Ultimate had been much more successful in Nevada than in New Jersey), as it brought in only a little more than $30,000 last June.

There are a number of potential changes that could energize the online poker market, though it is unclear when any of these might come to pass.

One possibility is connecting New Jersey to the interstate network used by Nevada and Delaware; however, there has been no indication that this will take place anytime soon, or that there have been any serious talks about the possibility of a merger.

Another possibility is the introduction of PokerStars to the New Jersey market.

We still seem to be in a holding pattern when it comes to PokerStars gaining approval from state regulators: while Amaya CEO David Baazov has expressed confidence that the company will be able to launch in the state during the third quarter of this year, there has been no confirmation of this date, and state officials have been tight-lipped about the reasons for the delays in licensing the world’s largest poker site.