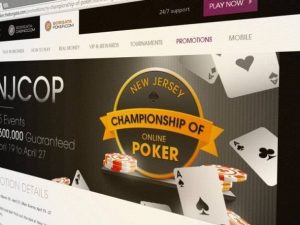 New Jersey’s online poker market bounces back a little, but it’s too early to talk of a recovery. (Image: pokerfuse.com)

Collectively New Jersey’s online poker and casino sites have posted their most successful month since the beginning of regulation, according to the New Jersey Division of Gaming Enforcement.

The regulator published total revenues of $13.22 million for November this week, which just beats the previous record of $13.16 million set in March of this year.

Take the online casino revenue, which is going from strength to strength, out of the equation and it’s a different story.

It’s not a completely desolate story, though. The good news is that online poker was up month on month and year on year.

November is always likely to have higher traffic than October because the colder months ensure that people are more likely to engage in indoor recreational activities.

There is also one extra day in November, and meanwhile the televised WSOP final table will have provided more exposure for the game in general, and specifically for WSOP.com.

The yearly increase is encouraging, not least because poker has been in slow decline in New Jersey, reaching its nadir in September of this year when the state’s poker sites raked a combined total of $1,771,123.

The all-time high was $3.44 million, in January 2014, just a month after regulated online poker was launched.

Much will depend on the figures reported over the coming months before we can talk of recovery, but, with PokerStars likely to enter the market sometime in the first quarter of 2016 things could finally be looking up.

The online poker giant’s arrival is expected to increase consumer awareness of the market which should help it grow holistically.

Until PokerStars appears to shake the market up a little, the Borgata/Party partnership remained the market-leading operation, with $1,102,595, with the Caesars/888 partnership bringing in the remaining $854,918.

Betfair whose online poker operations in New Jersey failed to gain any traction whatsoever, may be taking the first peer-to-peer online horseracing wagers as early as March 2016.

New Jersey is hoping that the introduction of the betting exchange model will help to invigorate interest in, and revenue for, the horseracing industry.

Betfair had been waiting four years to receive a license from the New Jersey Racing Commission.