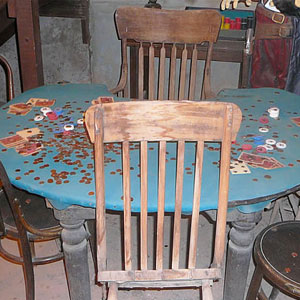 Having home poker games be an illegal activity is a questionable reality in many American states but New Hampshire is now taking steps towards fixing this old law and the results are positive.

You’ve had a long, hard week at work. It’s Friday night and you just want to relax. Friends come over to your man-cave basement for a friendly game of poker. Antes are just a dollar so no one’s going broke. Everyone is having a good time.

Suddenly, there’s a knock at the door. When you answer it, in rush a dozen law enforcement officers, yelling at everyone to put their hands in the air. Eventually, the busted poker players will each pay a $500 fine for a $5 game, or maybe go to jail.

Sound far-fetched? It’s not. In many states across the U.S., it’s illegal for anyone to play poker, even in a private home game. But now one state is doing something about its archaic anti-poker laws.

The Fight for Home Games

According to the Lawrence Eagle-Tribune, a Massachusetts newspaper, the New Hampshire state legislature has just taken the first step towards legalizing private home poker games. Earlier this month, a panel of New Hampshire State House members voted 19-0 to recommend that the full State House of Representatives vote to approve a bill that legalizes small-stakes poker games that take place in private homes.

The bill is scheduled to be voted on and passed next month. It will then go to the New Hampshire State Senate, where it is also expected to pass. The governor of New Hampshire would then have to sign the bill to make it a law. Even if the governor did not sign it (and there has been no indication he won’t), support for the bill appears to be ample in both chambers of the State legislature, enough for an override should the governor choose to veto.

Most state legislators don’t actually think it will get that far. That’s because support for the bill is not only strong, it’s bipartisan—both Republicans and Democrats in the state legislature favor it. “This bill legalizes home poker games as long as the house takes no rake, no admission can be charged, odds can’t favor any player, there is not a house bank and the games cannot be advertised to the public,” said State House member Patricia Lovejoy, a Democrat from Stratham.

“An informal game among friends has been illegal in New Hampshire,” said State House member George Lambert, a Republican from Litchfield who sponsored the bill. “They could come in to arrest you for a nickel-dime-quarter game.”

“People may not realize informal games are illegal, so we’re taking an old law off the books,” said State House member Gary Azarian, a Republican from Salem. Azarian also noted that since the soon-to-be legal home poker games are private, they won’t interfere with charitable poker games held by local organizations to raise funds. “This will not impact charitable gaming at all,” he said.

Raiding private home poker games and arresting the card players has long been standard operating procedure for many police departments. This especially holds true for small towns where there is little other crime and the cops have to make periodic busts in order to justify their employment.

Perhaps the most infamous case of small-town police going “Barney Fife” on a private poker game occurred a number of years ago and involved a professional baseball player. Lenny Dykstra, who played for the New York Mets and then the Philadelphia Phillies, was arrested with a group of cohorts in a small town in Mississippi after local police raided a private poker game they were all playing at a private home. Dykstra is currently in prison on unrelated fraud charges.

Wow, you can play poker in your own home. Amazing.