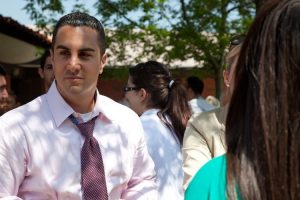 Assemblyman Mike Gatto has introduced a new California online poker bill that he hopes will gain traction in 2015. (Image: timeofsandiego.com)

A new California online poker bill has been introduced by Assemblyman Mike Gatto (D-Glendale), a move that could mark the beginning of a 2015 push to regulate the game in America’s most populated state.

The new bill is similar to a draft bill that was floated by a coalition of tribal groups earlier this year, though it is not identical to any of the many previous Internet gambling bills that have been introduced in the past.

“The status quo is a lost opportunity,” Gatto said in a statement. “California could receive significant revenue for merely regulating and legitimizing an industry that Californians already participate in but send their dollars overseas.”

The bill, known as AB 9, has many of the same features that a tribal gaming coalition agreed to over the summer. Only card rooms or Native American casinos would be allowed to operate online poker sites, essentially freezing the horse racing industry out of the game. In addition, there is a bad actor clause in the new legislation, one that would likely be used primarily to keep PokerStars from participating in the state’s online poker market.

However, it’s possible that some of the language used in Gatto’s bill might offer a window of opportunity for Amaya and PokerStars.

There is language that specifically notes that even a company that purchases the assets of an entity that would otherwise be considered a “bad actor” should be found “not suitable to obtain a license.” However, another section say that this can be waived if giving a license to the new owners “will not adversely affect the integrity of, or undermine public confidence in, intrastate Internet poker or otherwise post a threat to the public interest or to the effective regulation and control of intrastate Internet poker.”

Registration, Some Banking, Would Be Handled In Person

One of the more interesting aspects of the bill regards how players register for site and how banking would be conducted. Players would be required to initially register for online poker in person at the card room or casino that holds the license for the online poker site in question.

Alternatively, players may also do so at “satellite service centers,” which will need to be located at a card room or tribal casino.

These service centers will also play a key role for players who want to make deposits and withdrawals into their online poker accounts. Initial deposits will have to be made either at the operator’s venue or a satellite service center, and withdrawals over a certain amount may also have to be made at these locations, though no firm numbers appear as of yet in the legislation.

In an interview with PokerNews, Gatto said that he hoped these satellite service centers would help smaller card rooms and casinos that are likely not to have viable Internet poker sites be a part of the industry, which in turn might generate more foot traffic for those venues.

“A lot of people in the gold rush got rich selling shovels, and we think we have a proposal that has shovels in it now,” said Gatto.

According to the assemblyman, there’s unlikely to be any imminent movement on the bill, and Gatto hopes that a broader consensus can be built by next summer.

“California has led the world in computer and Internet innovation, and there is no good reason why we can’t continue to lead with a sensible online­poker framework,” he said in a statement. “AB 9 borrows from time­-tested business practices that will improve our government finances and keep our money in our home state.”