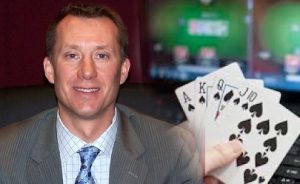 AG Burnett, head of the Nevada Gaming Control Board, says proposed sports betting bill SB40 is not an anti-poker bill, despite some vague language. (Image: igamingplayer.com)

SB 40, the latest Nevada gambling bill that poker players feared could be used to attack tournament staking culture and do untold damage to the World Series of Poker (WSOP), relates only to sports betting, the Nevada Gaming Control Board has clarified.

At first glance, the bill, which is essentially about reducing the possibility of money-laundering by outlawing the use of proxy sports betting services, appeared to include language that threatened the practice of tournament poker staking, and by extension, the very future of the WSOP.

“This bill additionally provides that it is unlawful for a person to receive any compensation or reward, or any percentage or share of the money or property played, for: (1) accepting or facilitating a bet or wager on the result of any race, sporting event or future contingent event, without having first procured, and thereafter maintaining, all required gaming licenses,” the bill stated, confusing and concerning many poker players.

It was the vagueness of the phrase “future contingent event” that first set alarm bells ringing on the poker forums earlier this week.

Staking culture is integral to tournament poker, particularly the WSOP, and thus to the poker economy in general.

Players use it to limit the high variance and offset risk by spreading their money around as multifariously as possible. Banning the practice would undoubtedly decimate the fields at the WSOP, and would make an event like the Big One for One Drop completely impossible.

A depleted WSOP would be disastrous for poker in general.

“This isn’t a Poker Bill”

However, it turns out fears of persecution were completely unfounded.

Chairman of the Nevada Gaming Control Board A.G. Burnett clarified the situation in an email to Pokerfuse.com: “I’ve seen a couple articles on the Board’s bill regarding certain types of wagers,” he said. “Just to clarify, this isn’t a poker bill, it is solely related to sports betting only.

“The reason for the ‘future contingent event’ is that our sports books don’t always take strictly sports-related bets; we have allowed them to take non-sports bets in the past and the possibility exists that they might be allowed in the future … SB 40 is centered on bets occurring in sports books only.”

So for now, poker players can breathe a deep sigh of relief. Let the deal-making begin.