Nevada poker rooms raked in $9 Million in revenue last month, a slight drop off from a year ago. The Silver State has more poker rooms and tables than any other state in the country.

A large portion of those poker rooms are located in Las Vegas, the home of the World Series of Poker. 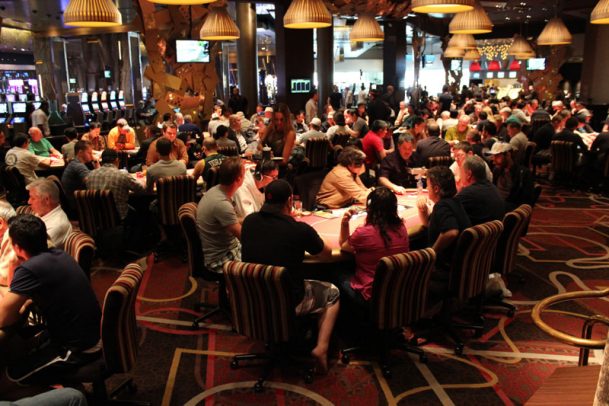 February is traditionally a slow month for poker in Nevada compared to the summer months during the WSOP. The poker rooms benefited from Super Bowl weekend, however.

Nevada is the only state with legalized sports betting. Millions flock to the state to wager on the world’s largest sporting event. Many of those tourists play poker.

The state will lose a few more poker tables once Monte Carlo Resort and Casino on the Las Vegas Strip closes its poker room this Spring. The resort is currently undergoing massive renovations and a name change. It will soon operate under the name Park MGM.

MGM Resorts International, the casino’s parent company, is investing a reported $450 million on the project. Monte Carlo doesn’t have one of the most popular poker rooms in town, but it will contribute to a continuing decline in poker tables in operation in Nevada.

Monte Carlo’s eight poker tables don’t attract high traffic. But the attached casino, Aria, has one of the busiest poker rooms in the world.

The Aria poker room is packed daily and features Ivey’s Room, a small room where the highest rollers compete. The casino, along with Bellagio and Venetian, generate a significant portion of the state’s total revenue. The Nevada Gaming Commission doesn’t release individual casino revenue.

There are other places in the Silver State where poker is beloved. Away from the Strip in Sin City, casinos such as Golden Nugget, Red Rock Casino, and Green Valley Ranch, poker helps the casino’s bottom line.

In Reno, there are a few hotels (i.e. Peppermill and Atlantis) that boast popular poker rooms.

Poker may never become as popular as it was when the game hit its peak in 2007. That was the year Jamie Gold won a record $12 million in the WSOP Main Event.

At the start of the year in 2007, there were 881 poker tables in Nevada. Since then, the state has seen a 32-percent decline. It’s been a consistent drop.

But overall year-over-year revenues the past few years have held steady. In 2015, the Silver State raked in approximately $117 million in poker revenue.

That figure dropped only two-thirds of one percent in 20016. Poker is on a slight decline since its heyday earlier this century, but it certainly isn’t dead.

It will be dead soon if the rake remains at the unbeatable level it now is.