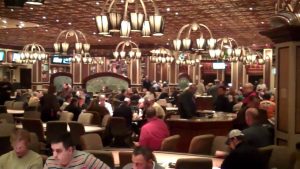 Bellagio has one of the most famous Las Vegas poker rooms. (Image: YouTube)

Nevada poker rooms raked in $8.7 million in revenue during the month of October, matching last year’s mark for the same month. The Silver State has more card rooms (65) than any other state in the country.

It is also home to the World Series of Poker, World Poker Tour events, and other major tournaments.

The month of October can be looked at through a glass half full, glass half empty lens. On one hand, the Nevada poker scene isn’t seeing a decline in popularity. On the other hand, there hasn’t been an increase in revenue generated over the past year.

In 2015, the state raked in about $118 million for the year, a slight decline from 2014. With November and December revenue still to be calculated, things are looking good for the Silver State to match 2015 figures. Through October, Nevada poker rooms have brought in $99.47 million, on pace with last year’s numbers.

The big money is generated during June and July due to the WSOP. When the series takes place, thousands of poker players from all over the world travel to Las Vegas for WSOP events and side games throughout the city.

Where the Money Comes From

It probably won’t come as a surprise, but the majority of the state’s poker revenue is generated on the Las Vegas Strip. In total, 62-percent of the money was brought in by Strip poker rooms ($5.4 million) in October.

There are a total of 274 poker tables on the Strip. That includes internationally recognized poker rooms such as Bellagio, Aria, Venetian, and Wynn. The Strip’s most famous poker room, Bobby’s Room inside the Bellagio Poker Room, hosts some of the highest stakes cash games in the world.

Regulars in Bobby’s Room include Doyle and Todd Brunson, Jennifer Harman, Daniel Negreanu, and others.

How it Compares to New Jersey

Nevada is the top poker playing state in the country. But New Jersey has long been a favorite destination for those in the northeast. Atlantic City, the only place with casinos in the Garden State, has one major poker room (Borgata). Many major poker tournaments are hosted at Borgata.

In October, the state raked in $4.5 million in poker revenue. Atlantic City used to be referred to as the “Vegas of the east,” but gambling revenue has declined the past decade. The famous Trump Taj Mahal, once a poker mecca, closed its doors for good in October.