The Nevada poker industry had a strong month in its busiest month of the year: June. In total, the 65 poker rooms in the Silver State combined to generate more than $16,137,000 of revenue during that summer month.

The last time the state raked in that much revenue from poker was back in 2009. And compared to last year, Nevada card rooms brought in nearly two percent more cash than June 2015. 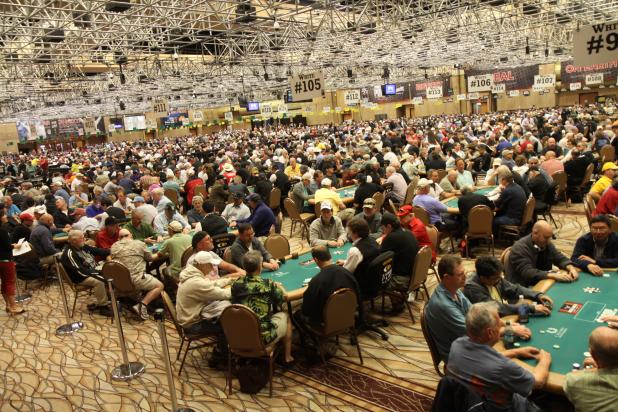 June was busting out all over: the World Series of Poker 2016 at the off-Strip Rio in Las Vegas had the most action-packed Nevada poker rooms for the month of June. (Image:  wsop.com)

June, of course, is traditionally an important month to the Nevada poker industry. The World Series of Poker (WSOP) draws thousands of poker players to the city from all over the world. Many come to town for more than just Series events. They also visit Sin City to play in cash games and non-WSOP tournaments hosted at casinos all over town.

Each year, June brings the state more money from poker than any other month. The majority of that revenue comes from Las Vegas, where the World Series of Poker is hosted. But card rooms up in Reno and a few other smaller towns account for a decent chunk of the money as well.

The other months don’t even compare to June in terms of revenue. The closest competition is July, and the Nevada Gaming Control Board will release those figures soon. Until then, here is a comparison of revenue month-by-month in 2016 (with WSOP.com online poker revenue, which is played only in Nevada, included):

The bulk of Nevada poker revenue comes from the Las Vegas Strip and surrounding casinos, such as the WSOP’s headquarters in the Rio. Approximately 30 percent of the state’s card rooms are located on or near the Strip, and about 75 percent of the poker revenue is generated from these casinos.

The state doesn’t release a detailed breakdown with figures from each card room. But, for those who visit Las Vegas to play cards, it’s quite obvious which poker rooms bring in the most money.

Bellagio, Aria, Wynn, Caesars Palace, and Venetian boast the most popular poker rooms on the Strip. Green Valley Ranch, Red Rock Resort, Golden Nugget, and Binion’s are among the top poker spots off the Strip. During the WSOP, the Rio (located about a mile west of the Strip) attracts more cash game and tournament players than anywhere else in town.

Las Vegas isn’t the only place to play poker in Nevada, of course. Some poker rooms, such as the Peppermill and Atlantis in Reno, also do quite well. No state generates as much revenue as Nevada from poker, or gambling in general, as Nevada does, to no one’s particular surprise.