A Nevada poker room study conducted by the University of Nevada-Las Vegas (UNLV) Center for Gaming Research shows the game is on a steady decline in terms of popularity, and has been for quite some time. 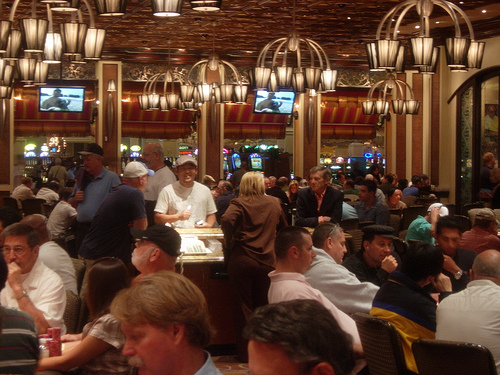 Nevada poker room boom gone bust: the Bellagio’s is one of many in the state that don’t generate as much revenue as they did during the height of the poker boom.  (Image: thedibb.co.uk)

Pulling from data released by the Nevada Gaming Control Board, the researchers put together a table showing gaming revenues generated by the state since 1992. The table also indicates the number of poker rooms and tables in the Silver State from year to year.

Each year, Nevada collects 10 percent of the revenue its poker rooms generate. So if, say, Bellagio were to rake in $500,000 from poker this year, the casino would owe the state $50,000.

Therefore, poker tax revenue is a reflection of the game’s popularity, especially in a state considered by many to be the poker capital of the US, if not the world.

The results are clear. Land room poker hit its peak from 2004-2007 and, except for a very small increase in revenue in 2013, has been on a steady decline ever since.

The peak years coincide with the largest WSOP Main Event prize pool ever (2006), and one of the biggest declines in revenue came the year after Black Friday, in 2012.

Then 2004 saw a revenue spike of 44.8 percent, the largest over all the years researched. In 2005, again, Nevada nearly doubled its poker revenue from the previous year, by 42 percent.

At that time, poker had become mainstream. ESPN, the most popular sports media outlet in the world, expanded its WSOP coverage, even showing poker in primetime slots. Fox Sports began airing the World Poker Tour, and even channels such as Game Show Network and Bravo joined the party.

In Nevada, casinos had to accommodate the poker boom by either building a poker room or expanding an existing room. There were 58 poker rooms in the Silver State in 2003. By 2009, there were 114.

After Black Friday, poker rooms started closing up. There are now less than 80 rooms remaining in Nevada, quite a few less than the 92 poker rooms in 1992, long before any major poker boom, even.

It’s no secret that poker hit its peak nearly a decade ago and has failed to resurrect the pre-Black Friday era, either within or outside Nevada. Many believed that legalizing online poker nationwide would accomplish that goal.

But without any signs of such legislation at the federal level, businesses like the Global Poker League and Poker Central have picked up the glove. Poker Central, launched in October, is the first-ever 24/7 poker network and hopes to catch on worldwide.

The Global Poker League (GPL), a team poker league attempting to “sportify” the game of poker, will begin its first season next month. This new concept will, if things go founder Alex Dreyfus’s way, will reinvent the game and spark another poker boom. Coincidentally, Moneymaker is a GPL team manager.

Will Poker Central and the GPL help the game get back to its heydays? That question will be answered before the decade is out.

This can’t be a surprise to anyone that the poker boom is long past. I found the writer’s mention of Poker Central interesting. This channel is about to being airing “Live At The Bike on Mondays”. This show features real, live, everyday players gambling it up, talking loud – albeit sometimes a little crude – and generally having a good time playing poker. “Poker Night In America” attempts the same with a more professional group of players. Shows like these might help to counter what has become the increasingly drab face of professional poker.

Good to see moneymaker get involed with the GPL. I hope they can bring poker back to the hey day. It would help if web sites had more vacations to Nevada. A good help will be when Pokerstars opens in the United States. They have enough clientel to have steady poker vacation packages that could go to Las Vegas.