Nevada poker rooms raked in $117 million in revenue in 2016. The state brought in less than it did in 2015, but only by the slimmest margin: approximately two-tenths of one percent. 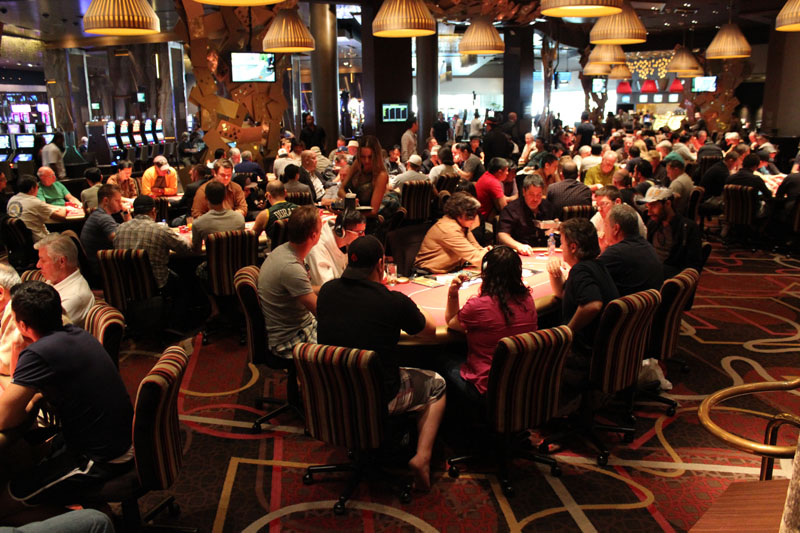 Nevada poker rooms, including this popular one at Aria in Las Vegas, raked in $117 million in 2016. (Image: pokertips.org)

There is a total of 73 card rooms in the Silver State, most of which are located in Las Vegas and Reno. Sin City is considered the poker capital of the United States.

In Las Vegas, the Strip is the prime place to play poker. With world-renowned poker rooms such as Aria, Venetian, and Bellagio all on the Strip, it’s no surprise that Las Vegas Boulevard accounts for a large portion of Nevada’s poker revenue ($78 million in 2016).

Gaming authorities don’t release revenue figures from each individual casino. But any avid card player in Las Vegas will tell you that the busiest poker rooms are inside Venetian, Bellagio, Wynn-Encore, Aria, and Caesars Palace, all of which sit on the Strip.

Off-Strip poker rooms such as Red Rock Resort, and downtown’s Golden Nugget and Binion’s, have large customer bases. And, of course, the Rio (one mile west of the Strip) is the summer home of the World Series of Poker.

There are a few popular poker rooms in Reno as well. Atlantis and Peppermill have hosted major poker tournaments, including WPT events and Jason Somerville’s Run it Up Reno. Grand Sierra Resort also attracts a healthy cash game crowd on certain days.

Every year, card rooms in Nevada rake in the most money during the summer months thanks to the World Series of Poker. Thousands of players from all over the world descend upon the desert city to vie for millions from the end of May through to mid-July.

March was the next best month ($9.68 million). Many gamblers come to Las Vegas in March to throw back a pint or 14 for St. Patrick’s Day, not to mention the insanity known as March Madness, aka the NCAA Men’s Basketball Tournament.

Compared to the Glory Years

Poker is still a thriving game worldwide, and especially in Nevada. But revenues generated in recent years can’t compare to the poker boom era earlier this century.

But revenues have held steady in recent years. Casinos are bringing in far more money now than prior to the poker boom era.