We all got spoiled during the poker boom, but poker is hardly dead. The 2017 numbers are in, and they reveal poker revenue in Nevada remaining relatively flat — increasing by less than 1 percent, about $800,000, to $118.5 million — but doing so while the number of tables and poker rooms (RIP Luxor and Monte Carlo) were on the decline. 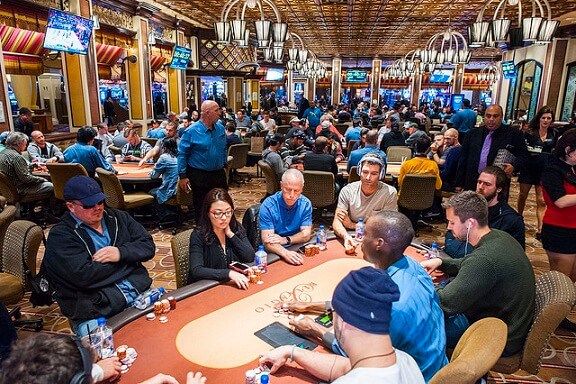 The Bellagio poker room is one of many in Nevada that continue to thrive in the post-poker boom era. (Image: gamboool.com)

Dr. David Schwartz, director of UNLV’s Center for Gaming Research, compiled numbers from the Nevada Gaming Control Board over the past 25 years, and put out earlier this month, “Nevada Poker: The Evolution,” which looked at statewide poker revenue totals from 1992-2017.

In addition to revenue numbers, his report also tabulated the number of card rooms and poker tables associated with that revenue. He also issued similar reports for baccarat and sports betting in Nevada over multiple decades.

Looking back, Schwartz’s data tells a story. Poker revenue in Nevada, or anywhere in the United States, may never approach poker boom levels. But the game is still attracting more players than pre-2003, when Chris Moneymaker set the boom days into motion.

As a matter of Nevada poker room revenues, the poker boom peaked in 2007, when 907 tables in the state generated $168 million in gross gaming revenue.

Interestingly, revenues were declining in the years before Black Friday in 2011, but it wasn’t until 2011 that the number of tables operating in the state started to dip. That decrease has continued for seven consecutive years. The number of poker rooms also has steadily declined, from a high of 114 in 2009 to 71 today.

The Las Vegas Strip is home to nearly half the poker tables in the state (300 of 615), with its games accounting for 66 percent ($78.5 million) of poker’s total gaming revenue in 2017. Washoe County in northern Nevada, home to some popular poker rooms such as the Peppermill and Atlantis in Reno, had 57 poker tables and raked in $6.5 million last year.

The Silver State had more card rooms 25 years ago than it does today (89), but most of those were small, totaling only 571 tables. The average number of tables per room went up from 6.1 in 1992 to 8.7 in 2017 (which was down from 9.1 in 2016). There weren’t many poker rooms with 20 or more tables back then, either, whereas now there large card rooms populate the Strip at casinos such as Bellagio, Aria, Venetian, and Wynn. 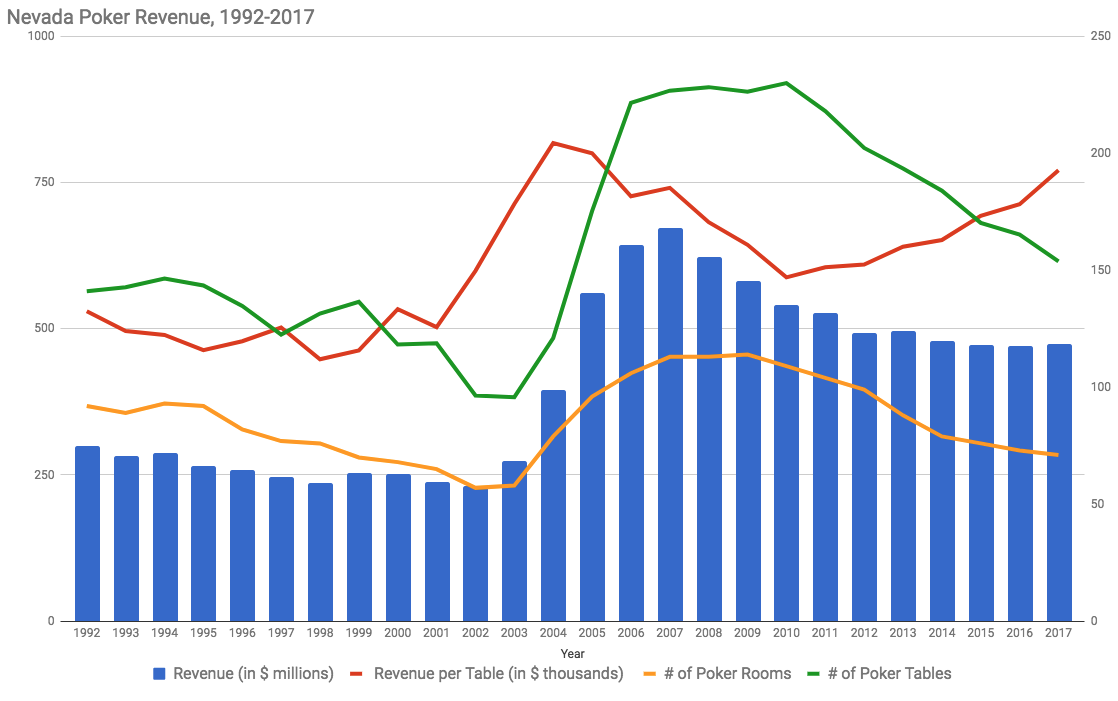 CardsChat added to Schwartz’s research findings by calculating the average revenue per table since 1992, which revealed that while Nevada’s poker revenue has been relatively flat for the past few years, the state seems to be maintaining those levels with fewer rooms and tables.

We found that revenue per table is one statistic that has steadily improved for eight consecutive years. In 2010, that figure was at its low, with a typical table in Nevada generating about $147,000 a year, which was slightly worse than they were doing in 2002.

I think, it is also due to the fact, that there is
more money among less players. Like in whole economy the
money is attracted to few or less people. Maybe the numbers of
poker players is increasing, what is also kinda substituded
by the poker rooms, that evolve more and more these casino games
and other fun games. Maybe some people are more tending to
involve to such games instead of playing reasonable poker,
because it means more efford for them, than playing
any slots or something similiar.