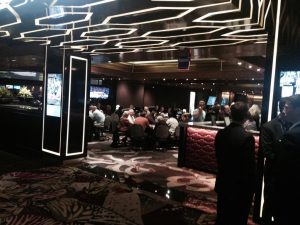 The Mirage Poker Room, which reopened in May albeit with seven fewer tables than it had had previously. (Image: twoplustwo.com)

Nevada’s 71 poker rooms reported revenue of $8,730,000 in October. While this represented just a 0.15 percent decline in comparison to October last year, takings for the past 12 months was down 2.28 percent $118,260,000, compared to the same period a year ago, according to the Nevada Gaming Control Board.

The figures are a concern, because, in general, tourism is booming in Las Vegas and the city looks to be on course for a record year for visitor numbers.

The WSOP enjoyed a record year in terms of visitors, and naturally the poker rooms were buzzing over the summer, thanks to a deliberate ploy by organizers Caesars to increase the number of affordable buy-in, big-field tournaments.

But this belies a downward trend when the world’s poker players haven’t been lured into town by the jingle jangle of WSOP bracelets. Throughout 2015, revenue increased year-over-year from May to August, while dropping in the other six months of the year so far.

The good news is that the Mirage poker room reopened in May after a four-month redecoration; the bad news is that it reopened with seven fewer tables than previously.

Meanwhile, Hooters was the second casino in Las Vegas to shutter its poker room this year, and the 14th over the past two and a half years.

The casinos that looked to cash in on the poker boom of the mid-noughties by opening poker rooms are beginning to abandon the idea in preference for more lucrative rows of slots, which remain the biggest money-spinner for operators on the casino floor.

And while more people are coming to Vegas, figures suggest fewer are coming to gamble. A recent study by the Las Vegas Convention Centers Authority found that, of the 41 million people who visited Vegas last year, while 71 percent placed at least one bet during their stay, only 12 percent of visitors to Las Vegas in 2014 came primarily to gamble.

Instead they focused their attention on the increased non-gaming amenities that Vegas has to offer.

Don’t care that Vegas is losing money. can’t wait till online gambling is legit then they will lose even more. this is a great list of casinos not to go to, as I would only go to Vegas to play poker. thank you Phillip.