The Nevada online poker industry would improve by sharing liquidity with New Jersey, according to Governor Brian Sandoval. But there’s just one problem:  the Garden State’s governor, Chris Christie, hasn’t agreed to anything yet. 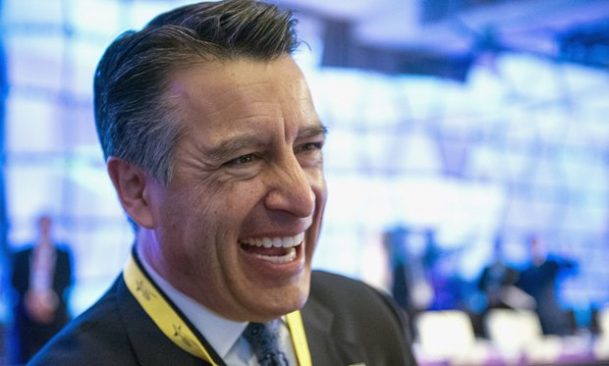 Governor Brian Sandoval thinks the Nevada online poker industry would benefit from sharing liquidity with New Jersey. But will New Jersey’s Governor Chris Christie get on board? (Image: Cliff Owen/AP)

Speaking at the Gaming Policy Committee meeting on Friday in Las Vegas to discuss how the state’s casino industry could benefit from eSports, Sandoval let it be known that a shared player pool between his state and New Jersey would be a home run.

“It would be like putting together the Yankees and the Dodgers,” the governor said.

The New York Yankees and Los Angeles Dodgers are two of the highest-revenue generating Major League Baseball franchises, so the analogy was a hopeful one.

Currently, only three states have legalized online poker, with Delaware being the third. Nevada already shares liquidity with Delaware, but would benefit more from partnering with New Jersey because that state generates far more in online gambling revenue. Last month, the Garden State brought in almost $2.6 million just from Internet poker.

What’s the Hold Up?

Shared liquidity between two states with established regulated online poker sites may seem like a no-brainer to some, but that doesn’t mean Christie agrees. Las Vegas Review-Journal reporter Rick Velotta noted on Twitter that Sandoval has offered to speak with the New Jersey governor.

The Silver State’s governor spoke out in favor of a shared player pool a day after New Jersey announced record online gaming revenue generated in April. Coincidence? Maybe not.

A larger player pool would mean more games available for poker players in each state. And one of the industry leaders, WSOP.com, is already set up in both New Jersey and Nevada.

So what’s the hold up? According to Mark Clayton of Greenberg Traurig, a major law firm, the Internet server location is the underlying problem. Neither side has said that if this issue gets resolved, an agreement will be made, however.

If there ever was a fear that PokerStars wouldn’t make an impact on the US poker scene, there is none anymore. The world’s largest poker site re-entered the US market, but only in New Jersey, late in March. Since then, the state’s online gambling revenues hit an all-time high.

As other states consider legalizing online poker (California, New York, and Pennsylvania among them), the impact PokerStars is having in New Jersey could influence lawmakers in a ripple effect of financial salivation.

Of course, it remains to be seen how PokerStars will fit into the equation, should New Jersey and Nevada agree on a pact to share liquidity. While WSOP.com currently operates in both states, PokerStars does not. A “bad actor” designation has a few more years (until February 2018) to play out before the Nevada Gaming Commission will reconsider the company as a gaming operator in the Silver State, and (currently on leave) Amaya Inc. CEO David Baazov’s alleged insider trading charges might not help that situation.

Then again, in the world ofiGaming, stranger things have come to pass.