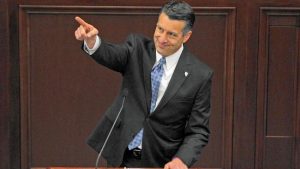 The issue of Nevada Daily Fantasy Sports (DFS) will be the topic of debate for the state’s Gaming Policy Committee in the coming weeks, thanks to Governor Brian Sandoval (R).

The last time the committee was brought together was in 2012, when it met to discuss the regulation of iGaming and, in particular, online poker. Despite lacking the power to physically enact any laws, the committee is an influential forum that’s used to formulate potential recommendations that could then pass to the state’s legislature.

In fact, at that last committee gathering in 2012, the recommendations discussed were eventually used to help facilitate the regulation of Nevada’s online poker industry, which kicked off in 2013.

This time around, Sandoval will focus on the DFS issues, an industry that was formally banned last October by Nevada Attorney General Adam Laxalt. The AG is against online gaming in general, a position he’s made clear by signing a letter in support of the Restoration of America’s Wire Act (RAWA) late in 2015, followed by a ruling that DFS is not a game of skill, and therefore illegal under Nevada’s current online gaming rules.

After Laxalt’s decision, the Nevada Gaming Control Board filed a cease-and-desist notice for DFS operators in the state.

Although the Attorney General’s opinion stated that operators such as DraftKings and FanDuel could apply for a Nevada gaming license to run a sports pool, this went against the operators’ joint stance that DFS is a skill-based activity.

The current influence of the Gaming Policy Committee is worth noting, in that before it was reformed in 2012, it had been inactive since the 1980s. The endless legal entanglements of online gaming no doubt made such an executive committee, which is made up of representatives of many aspects of the gambling business community and its advisors, a necessary and more respected entity.

According to Sandoval, Nevada should be willing to consider the regulation of DFS in order to maintain its status as a forward-thinking gambling state.

“Nevada has always been the epicenter for global gaming entertainment, regulation, and innovation. The industry is constantly changing and I believe the changes we are witnessing demand the attention of Nevada’s policy leaders,” said the governor.

In addition to the topic of DFS, the committee will also consider other aspects of the iGaming industry, including new gaming devices and skill-based games.

Although it’s unclear what these topics will address specifically, it could mean that online poker (which is the only real-money activity currently regulated in Nevada) might be joined by general casino gaming and other gambling options in the near future.

At present, there is no firm date for when the committee will meet to discuss the issue of iGaming. But when it does, with its representatives from all areas of the gaming industry from casino CEO Jim Murren to University of Nevada, Las Vegas gaming expert David G. Schwartz and beyond, you can bet that forming concensus on what direction to take will be no sure bet.