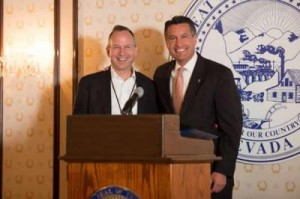 Nevada and Delaware signed an agreement on Tuesday – the first of its kind – to allow pooled online poker liquidity between the two states, effectively enabling them to share players across state borders. This means that, soon, a player in Delaware will be able to check-raise the living daylights out of a player playing at home in Nevada, just like the good old days.

Player liquidity is everything in online poker – it allows poker sites to host a huge variety of ring games and huge multi-table tournaments with massive prize pools, and that, in turn, attracts even more players. This is why poker networks like iPoker exist in Europe – to share player pools between skins and further drive liquidity and the market itself. Online poker needs a healthy player ecology to survive and – with federal regulation still a very long way off – interstate liquidity is a necessity for the success of the online game in the U.S. Thus, the agreement between the two states, which establishes a legal framework for the first fully legal form of interstate gambling ever, must be viewed as a landmark moment in the rehabilitation of Internet poker in America.

We are standing in a moment of history today,” said Nevada Governor Brian Sandoval. “Nevada first passed gaming in 1931. I consider this a landmark intersection in the road of gaming history.”

While the governors were unable to say exactly when the sharing of player pools would begin in earnest – much work still needs to be done on harmonizing software – it’s thought that Caesars WSOP.com might have something of a head start: WSOP.com’s tech partner is 888 Holdings, which also provides the software platform for Delaware’s online poker rooms.

The online gambling revenues of Delaware – with a population of fewer than one million people – have so far failed to live up to expectations. The Delaware Lottery said recently that the state brought in just $145,200 in January, $140,000 in December and $111,000 in November of 2013. It’s not just an exciting time for online poker, then, but also a new experiment into the potential of shared economic opportunities between states, and, as Internet poker regulation is rolled out gradually on a state-by-state basis, it seems inevitable that others will come on board. Indeed, the agreement was described as “multistate”, an unequivocal declaration that the door is open for others to join the liquidity pool.

But why stop there? While gambling law is never completely clear in the U.S., it seems there’s no federal legislation forbidding the offer of poker between American and EU and other nations, as long as there are no restrictive state laws in either participating state. It may take some time, but maybe… just maybe… we might one day see pooled liquidity between certain states in the US and other countries around the world. Then it would be just like the old days.