Delaware will be the main beneficiary of a new 888 Holdings and WSOP.com poker player pool network between the Diamond State and Nevada. (Image: gosmallbiz.com)

Nevada and Delaware have begun the first phase of their liquidity-sharing experiment, marking the first-ever legal interstate gambling transactions in the history of the US.

Bill Rini, head of online poker WSOP.com, announced the soft launch of the network late Tuesday, confirming that players from Nevada and Delaware were now legally three-betting, four-betting and double-barrel bluffing one another to their hearts’ content.

Meanwhile, 888 Holdings, which operates the shared platform in partnership with WSOP.com and the three Delaware racetracks, announced the “successful deployment of shared poker network across states of Delaware and Nevada in March 2015 creating significant competitive edge for 888 and its operating partners” in its earnings report on Wednesday morning.

The launch could not come soon enough for Delaware, which recently released its figures for January, reporting an alarming 69 percent decrease year-on year. Delaware announced just $27,695 in revenues for the month across all three of its racetrack-owned online poker brands, all of which share the same player pool.

Since it rolled out online gaming in November 2013, the Diamond State, with its population of just under a million people, has yielded the poorest cash game revenues of any state or nationally regulated market anywhere in the world.

Nevada, meanwhile, stopped reporting its online gaming figures in December since falling below the mandated three-site reporting minimum, but it had been on a downward curve up until that point, and well short of pre-regulation projections. 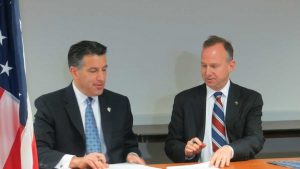 While the impact in Nevada may not be immediately apparent, it will be dramatic for players in Delaware, where player traffic has been practically non-existent.

And early indications are good; according to PokerScout, the 888 Delaware Platform reached a peak of 313 players on Tuesday night, which is even a good night in Nevada, and had previously been absolutely unheard of in Delaware.

Beyond that, it’s hoped that liquidity-sharing will have a snowball effect, as more players in Delaware discover that they can now find the ring games they want, as well as tournaments with bigger prize pools.

A healthier player ecology will, in turn, bring new players to the game, as the platform becomes more attractive and competitive with greater choices on offer, revitalizing the user experience.

888 is also due to launch its own branded site in Nevada, which will also jump on the network, as will a Treasure Island brand, which is expected soon. The effect of all these brands sharing one platform will be a combined, far-reaching marketing effort, which should further grow the network.

Nevada and Delaware have made it clear that the compact between the two states is open to others, allowing scope for the network to grow as more states opt to legalize and regulate online poker.