Negreanu and Brunson Join the “Is It a High Wave or a Nazi Salute?” Fray

To be fair, Todd Brunson has as a caveat on his Twitter feed: “Please don’t follow me if you are easily offended by silly racial or sexist humor.” So you’ve been warned and don’t keep reading if you are easily set off.

With this in mind, Daniel Negreanu and Todd Brunson shared a series of Tweets that themselves could have been interpreted as in poor taste, at the very least, depending upon which side of the media fence you happen to sit. 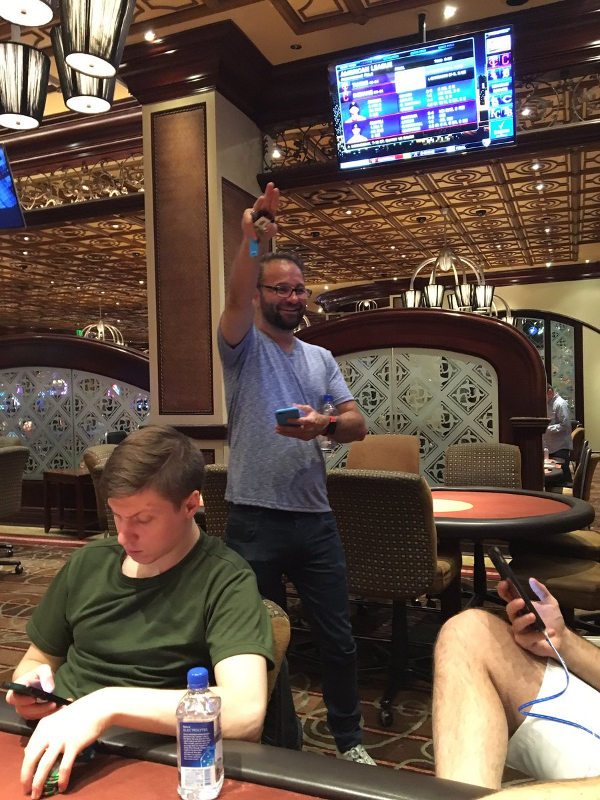 Reading through the younger Brunson’s Twitter feed for August 3, the son of the legendary Doyle Brunson stated that Negreanu greeted him at the Bellagio with a Nazi salute.

“I just walked in Bobby’s Room and @RealKidPoker stood up and gave me a Nazi salute. I always knew he was at the very least a Nazi sympathizer,” tweeted Brunson, presumably in jest.

Ah, politics. Where a smile at the wrong time, the color of a ladies’ suit, or a wave to the upper balcony can be reported on social media as nefarious and nefariouser, and before you know it, an innocent hello wave to the upper deck from on stage becomes a “Nazi salute,” as reported by haters of anyone in particular.

It’s worth pointing out that Brunson is known for his dry sense of humor, and often likes to play with his peers and followers online, but pictorial evidence does confirm his story.

It looks like Negreanu responded in what appears to be a lighthearted manner.

Both Negreanu and Brunson have strong political views, albeit on opposites sides of the political spectrum. Negreanu is infamously anti-Donald Trump, while Todd Brunson supports the billionaire businessman in his bid for the presidency.

And it appears all the brouhaha links back to the recent Republican National Convention (RNC), where radio talk show host Laura Ingraham’s wave to the balcony from the Cleveland stage was turned into something dark by viewers waiting in the wings to find fault with something, anything, and everything that happened during the four-day event.

After making a speech at the RNC, Ingraham signed off with a rousing call to vote for Donald Trump, before raising her right arm in what appears to be a combination of a point and a wave.

But as is often the case in political battles, Democrats were quick to pounce on the gesture and suggested that Ingraham was making a Nazi salute. A series of images and GIFs then flowed through the online sphere, as people on both sides of the political divide gave their take on the situation.

Perhaps a Touch of Satire

While a closer inspection of the footage would suggest Ingraham didn’t make a Nazi salute in any way, the story still became a standout moment from the RNC.

Not only that, but it highlighted the willingness of politically minded Twitter users to seize any opportunity to discredit supporters of the opposition.

With Negreanu making his dislike for Republican nominee Trump on Twitter crystal clear, there’s a good chance his salute was a satirical jab at those who appear to support him.

Just another day in what is turning out to be about the craziest US presidential election ever.

I know the answer for president is

He is my favorite player