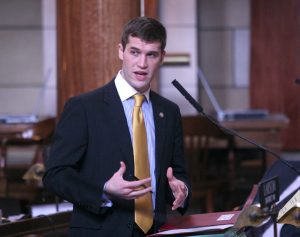 Nebraska poker rooms probably won’t be popping up in 2016, thanks to stiff opposition from state lawmakers. (Image: NebraskaLegislature.gov)

Nebraska poker players have long been forced to cross over the Missouri River into Iowa to play poker. Gambling is sparse in the Cornhusker State, which may be good for the Iowa economy, but is less convenient for Nebraskans.

Nebraska residents, especially those residing east of Omaha, would love to play poker in their home state.

Unfortunately, for them, there doesn’t appear to be much hope on the horizon.

Legislative Bill 619 was proposed by legislators last May.

If passed, poker would become legal in Nebraska, opening up the possibility for brick-and-mortar poker rooms to pop up around the state.

The bill didn’t make it far through the Nebraska legislature last year.

The state attorney general wasn’t too sold on the idea of Legislative Bill 619, questioning whether “luck” draw poker games should be legalized.

Games involving community cards, such as Texas hold’em, are often seen as games of skill.

Draw poker games are considered by some as games of chance with minimal, if any, skill.

Therefore, passing a poker bill in Nebraska will be difficult, if not impossible, with draw poker games included in the measure.

The good news for Nebraska residents is that the previously proposed bill is receiving some new attention by lawmakers. This time around, the proposal is likely to exclude draw poker games and include games which involve community cards.

The exclusion of draw poker is intended to make the opposition reconsider the bill. One of the biggest concerns most states have with legalizing poker, online or offline, is the “skill” factor. It isn’t easy to convince a non-poker player that the game is skill-based and not pure luck.

LB 619, originally proposed by Senator Tyson Larson, will be voted on sometime this year. If passed, poker rooms would be able to operate in locations that already have a liquor license.

The bill has to face some stiff competition from people such as Executive Director Pat Loontjer from the Gambling with the Good Life organization.

“Enough is enough. We have gambling here. We have horse racing. We have keno. We have the lottery. We don’t believe that expanded gambling helps families or businesses,” Loontjer said.

The anti-gaming activist appears to be getting annoyed with Larson’s persistence to get a gambling bill passed. She said she wishes Senator Larson would “stop bringing up these gambling bills that take up so much time and usually go down in defeat.”

Larson spoke about the benefits of opening poker rooms in Nebraska.

“Here’s an opportunity, an outside-the-box opportunity, to show … that we take these things seriously, help our local communities in their fundraising efforts, give money back to the local counties and cities into the property tax credit relief fund,” he told Omaha.com.

It’s not clear that 2016 will be the year that poker is legalized in Nebraska, but lawmakers such as Senator Larson won’t give up hope.