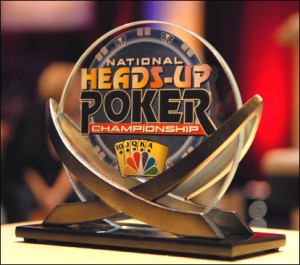 Mori Eskandani, producer of the NBC Heads-Up Poker Championship, has announced that NBC has axed the popular annual tournament that pits some of the world’s best players against one another in a series of “sudden-death” heads up matches. The invitation-only tournament carefully selected players for their ability to provide an entertaining and character-driven spectacle, as much as for their poker prowess, and included celebrities as well as pros, which made for great TV.

A quick look at the list of winners over the years is testament to the big personalities on the show – Phil Hellmuth (2005); Ted Forrest (2006); Chris “Jesus” Ferguson (2008); Huck Seed (2009); and Annie Duke (2010). Despite taking a hiatus in 2012 because of Black Friday, the show made a triumphant return in 2013 with WSOP.com as sponsor, with perhaps the biggest personality of the lot – Mike “The Mouth” Matusow – taking down the $750,000 first-place prize, beating Phil Hellmuth in the final. It was hailed as a victory for the “old school” of poker play.

“It means a lot to have Phil alongside me,” said Mike in the wake of that victory. “All you hear from the young kids is ‘Mike and Phil used to be good, but they can’t keep up with us kids, with our generation.’ But where are they standing today? I’m on top of the world right now. There is nothing that feels better than winning a tournament. Nothing. I hadn’t won one since 2008. I have only played about 40 since then, and these guys play about 40 a week. But, you know man, I feel good.”

The arrival of the championships in 2005 marked the first time a poker TV show had aired on network television, and signified to many that poker had truly “arrived” in the mainstream. It was the brainchild of Eskandani – who also brought us High Stakes Poker and Poker After Dark – and Henry Orenstein, the inventor of the hole-card cam (and, strangely enough, the Transformers range of children’s toys).

The hole cam invention revolutionized poker TV when it was first used in 1999 during Late Night Poker on British TV; once it entered the mainstream on ESPN with the 2002 World Series of Poker, huge audiences who would never have watched the game before became enthralled. World Poker Tour also starting using the device for its Travel Channel programming beginning in 2003.

While Eskandani was tight-lipped on the reasons behind the network’s decision not to re-commission the show, he hinted that the event won’t be going away completely, adding that there will be some “exciting news” later this month.

Let’s hope so. In an era where many are bemoaning the lack of new “true characters” in the game – thanks to the preponderance of young hoodie-wearing Internet kids in Beats by Dr. Dre headphones – the NBC National Heads-Up Poker Championship always provided some light relief. Poker needs its characters to attract new players to the game – and shows like this will always deserve our support.

Sad to hear when any poker show gets the axe. I for one am a big fan of poker on tv, although some of the commentary can become annoying.

That’s sad because it was such a great show. Hopefully, it will resurface on another network.